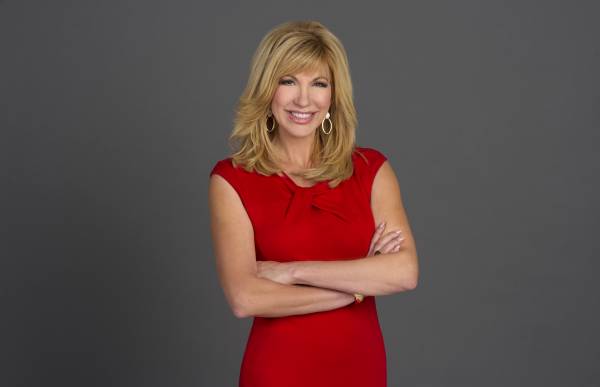 Leeza Gibbons is co-host of "America Now," the daily newsmagazine that _inevitably_ will be appearing on TVs in Los Angeles

About 2 months ago Raycom Media lauched "America Now," a fast-paced daily newsmagazine show co-hosted by Leeza Gibbons and Bill Rancic. The show is available all over the USA, except, for some reason, in Los Angeles. One month after launch "America Now" ranks among the top first-run syndicated shows premiering this fall in its markets, second only to Anderson Cooper. You can access the show's segments online at it's website but it seems kind of silly that in the land of media, this highly successful show has yet to find a spot but it's this success that makes local syndication inevitable.

Among many activities that Gibbons has been involved with outside of television has been launching a mineral makeup line, Sheer Cover, and starting a non-profit, Leeza's Place, which is aimed at caregivers for persons with memory disorders. Gibbons revealed that her experiences as an entrepreneur and a caregiver have particularly prepared her for this phase in her career.

We had the opportunity to speak to Gibbons about "America Now" and the evolution of entertainment reporting over the past 30 years.
——

This is a treat as I've enjoyed watching you on television, since I was a teenager-

Leeza Gibbons: For decades! [Laughs] I'm very very blessed and am privileged to have been asked to continue to come into people's homes.

You have seen television change so much over this period of time, from "Entertainment Tonight" to "America Now."

LG: I really have seen the evolution of television and it has been a dynamic progression. What's interesting is when you look at competing for market share and trying to deliver value to advertisers and sponsors, a lot of the old models are proving to be of great merit. That's the situation with "America Now." We're a syndicated nightly lifestyle newsmagazine which has, at the core, a team of contributors from our affiliates, like "PM Magazine" [from the 1980s] did. It's like being able to hire an A-list of contributors and correspondents without having to have everyone in a studio and without having to have all those people officially on staff. It's a brilliant concept to have specialists in regional areas of expertise, whether it's consumer, fitness, finance, or home decorating, all of those areas that we cover on a regular basis have personalities and contributors for whom that is their beat. That's really cool to be able to provide this at a realistic cost.

"America Now" used to be a weekly format. Did your involvement require the show to become a five-episodes-a-week? How did that come about?

LG: They had what they saw was the seeds of big success with the once-a-week edition with Bill Rancic. Then they came to me, I like Bill a lot and knew him before this, and I liked where they were going with the show. It's the right show at the right time for me. It's a logical extension of what I've been doing anyway. Providing information to enhance the lives of families and to empower people to be their own experts is a very natural fit for me. It's what I do at my non-profit work and it's a lot of what my own growth in television in radio has been. It was a no-brainer.

Do you have a lot of input on stories that interest you on this show?

LG: A good bit. When I first hit town many years ago I was very unsophisticated, I'm just a recovering redneck from South Carolina, and I say that with great affection as I'm proud to be from the south. I hit town and started to work at "Entertainment Tonight." Both "E.T." and MTV started the same year and they really changed the way we perceive and receive pop culture information. I've been able to grow along with that evolution. One segment I'm producing is "Home Grown Beauty Tips" where we're getting submissions from viewers about what they use from their own pantries to exfoliate, condition their hair, etc. and that's really fun. I'm also doing a segment called "Cross Train Your Brain" as I'm very interested on what we can do to maintain our cognitive function and I'm doing a series on caregiving, on how to support families who deal with someone who is declining - their psychosocial needs, the financial support they need, the practical tips they need as they change and adapt their lives.

I'm also interviewing people about success. One of the things that Bill and I share is that we're acutely interested in the clues that successful people leave behind. I'm interested in "How'd you do that? How'd you make it?"

Currently there isn't an LA syndication of your show, is that going to change?

LG: I sure hope we get cleared in Los Angeles, it's my hometown and it's essential for our growth. We do very well in which the markets we appear. We integrate really well with local news. The show is distributed in two half hours and the idea is that affiliates can choose to split the show into separate stand-alones but the affiliates, almost exclusively, are running the show in back-to-back half hours, but this flexibility is a great option. But I'm very hopeful that a carrier in LA takes notice of our momentum.

How important has the Internet been for this show and how important will it continue to be? You can get most, if not all the segments online. Will you continue to create content in a way that can easily be consumed on the web?

LG: Definitely, the content has been constructed with web platforms in mind. We know that people are receiving the information in areas where they are not able to view the show. We want to deliver the information at a rapid pace and unlike news programs we will send people to the web to get richer, more-detailed information to work through a problem or a process. We really want to make news that people can use. We also suspect that people who watch the show will tell us where they want us to go - I've always thought that viewers are never wrong and we need to be able to respond to them. It comes back to the center: what's the value of this show? Are we making people's lives better and in what categories? We want to be entertaining but we want to be credible and solution-oriented.

I think people are bombarded with information and are getting overwhelmed and it behooves us to provide information in a way that they can act on it.

Did you ever think that there would be entire networks devoted to covering entertainment? Essentially expanding upon the foundation you helped set?

LG: It's fascinating. I still don't see myself, at all, as an expert or an authority on entertainment, but it was such a unique journey and such a ride that we really did have an all-access pass, as we used to say. But to see stars become omnipresent and reality shows becoming the daily diet doesn't signifying anything to me other than growth, it's what the audience wants right now. But I never, in a million years, would have dreamt that it would become such a mainstay. I look at it now as a big sister of the genre that it provides such an opportunity to so many people to learn their craft and express themselves and their gift. That's been the coolest thing, to see people come out of communications and journalism. It's no longer enough for you to be talented and to know your stuff, you have to be a marketing expert and you've got to be adept at social media and self-promotion. I admire the commitment of these reporters, hosts, and producers, it's really impressive.