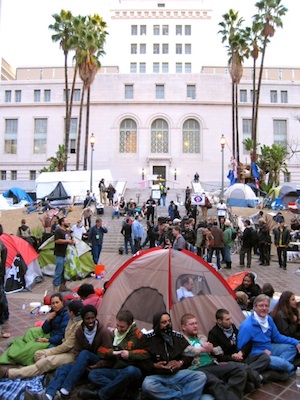 Occupy LA participants remain at City Hall Monday, November 28 (Photo by Aaroh Kuehn/used with permission)
Occupy LA has filed a complaint in pursuit of an injunction to block their eviction from the grounds of Los Angeles City Hall. The complaint focuses on the Occupiers' First Amendment rights, and claims, in essence, that because the City Council passed a special motion recognizing their movement and occupation of the City Hall lawn, the Mayor and the LAPD cannot override that resolution and seek their eviction.

When Mayor Antonio Villaraigosa announced just after 4:30 p.m. Friday that the Occupy LA encampment must vacate City Hall Park by 12:01 a.m. Monday, November 28, many were not surprised officials waited until the end of business ahead of a weekend, which would hamper Occupy participants from pursuing legal action while the courts were closed. However, the National Lawyers Guild, as rumored during the tense overnight hours from the deadline to sunrise Monday morning, were able to file the complaint in federal court.

The L.A. Times has published the full text of the complaint.

The document brings up similar "camping" scenarios that the city seems to endorse and indulge (or ignore) like nearby Skid Row and the recent camp-out ahead of the premiere of teen vampire flick "Twilight: Breaking Dawn," as proof city officials and the authorities enforce these anti-camping rules at whim.

Do the remaining Occupy LA participants have a legal leg to stand on outside City Hall when the park closes at night? The petitioners are not expected to hear a response regarding their legal filing until Wednesday.

Meanwhile, the LAPD say that they recognize that several people are remaining in the park, and that those campers are subject to arrest, however they have made no declaration of a plan regarding those campers' possible ejection, and insist they have not gone soft when it comes to enforcing the rules and the occupiers.

Occupy LA participants are urging as many people as possible to come down to their nightly General Assembly meeting, and stay through the night in case the LAPD opt to conduct a raid.