Occupy L.A. Protestors Prepare for City to Evict Them Tonight, LAPD Confirms That Plans Have Not Changed 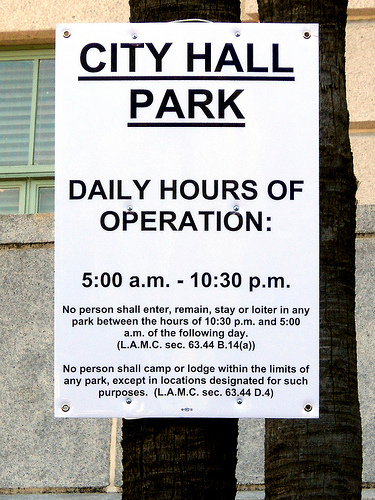 Photo by ~db~ via the LAist Featured Photos pool
Protestors at Occupy L.A. are preparing for police officers to evict them from the lawn of City Hall at the stroke of midnight tonight.

Protestors turned down a last-minute plea by city officials to leave the City Hall lawn tonight, according to the Los Angeles Times. Instead of telling people to leave, the protestors hosted a concert and invited everyone to come down to protest the eviction of the protest. Some members of the satellite movement in the San Fernando Valley were headed toward Los Angeles tonight.

"Until the grievances of the 99% are addressed to end corporate control of the system, the government and the media, Occupy L.A. will be here exercising our 1st Amendment rights and petition for our grievances," Julie Levine, an Occupy L.A. protestor, told the Times.

Earlier some protesters with Occupy Los Angeles spoke with a captain at City Hall who told them that the LAPD planned to postpone eviction until first light tomorrow morning. But an LAPD media rep Officer Cleon Joseph who spoke to LAist refuted that claim.

"There is no change in our current plan," Joseph told LAist, in a phone call. He added: "Whatever that officer is saying, I don't know where he got that from."

The original plan, as we reported earlier, was to tell remaining protestors camped out on the lawn to clear out by midnight tonight.

We'll be keeping an eye on what is going on tonight. This website has a list of sites that plan to stream throughout the evening. We'll be watching the #occupyla hashtag (below), but if you have any updates, photos or video, you can also contact us on Twitter or at tips@laist.com.