On Sunday night AMC's "The Walking Dead" made some serious headway only.... to go on hiatus until February. Even though "The Walking Dead" is a major hit for the network, stopping a show midway through a season will lose some viewers and it's not like nothing could happen between now and February to capture the public's attention. It just seems so weird to pull this train off the rails just when the season had built some serious momentum. Yet it was a great episode, and it's such a pleasure to see Steven Yeun become such a central character this season.
—- 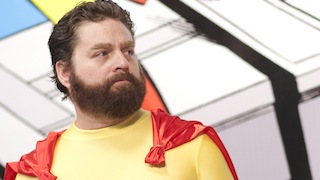 Zach Galifianakis as Super Ray features prominently in tonight's "Bored To Death" season finale on HBO at 9pm.
Thank goodness we're back to getting some new programming after passing through the disappointing wasteland that is Thanksgiving weekend. Tonight keep your eyes open for the season finale of HBO's "Bored To Death" which will have many guest stars, including, I believe, Patton Oswalt, and Zach Woods (Gabe on "The Office" - see another one of his web vids at the end of this post). I really really hope that HBO brings back "Bored To Death." It's not lowest-common-denominator comedy, it has literary references ranging from the Mikado to Cervantes to Raymond Chandler, it has the best comedy trio on TV (Ted Danson, Zach Galifianakis, Jason Schwartzman), and it's shot lovingly and beautifully in New York as only people familiar with the place can evoke. The series has only become stronger with each season and it's giving people who don't want to watch Monday Night Football or "Two and a Half Men" something to look forward to every Monday now that you've moved it from Sundays. Please bring this gem back again next season.
—-
Emily Nussbaum of the New Yorker wrote a great article on "Whitney" and "Two Broke Girls" and I find myself agreeing with most of her points. The talent of Whitney Cummings is considerable which leads one to believe these shows could be so much more - I can't figure out if it's the network handlers screwing with the shows or if 2 primetime shows are too much for a rookie showrunner to handle. At any rate, I'd go see Cummings perform anytime as well as her "Whitney" co-star, Chris D'Elia, with whom she definitely has chemistry. I just want things to be a bit closer to their potential.
—-
Congrats to Jimmy Pardo (aka @NeverNotFunny) and crew for raising over $36,000 for SmileTrain at their 12-hour Pardcast-a-Thon over the weekend, exceeding their goal of $26,000. If you missed a chance to donate, the page to do so is here.
—-
Merry Christmas to NBA fans who will see the first 5 games of the truncated basketball season aired that day. I guess the millionaires reached an agreement with the other millionaires? Congrats to the millionaires.
—-
The TV Junkie Must-Watch Plan: "Adventure Time," "Regular Show," "Bored To Death," "Enlightened," "Rock Center With Brian Williams," "Chelsea Lately," "The Late Late Show With Craig Ferguson"

8:30pm Billy Liar TCM - (1963) A British undertaker's clerk (Tom Courtenay) lies to his girlfriends and dreams of a land where he is king.

9:00pm Bored to Death HBO - Season Finale Nothing I Can't Handle by Running Away Jonathan is taken hostage; Ray uses his fans; George throws a wedding.

10:00pm Rock Center With Brian Williams NBC - An increasing reliance on government food assistance changes how one retailer does business; investigators reveal improved standardized test results in Atlanta were a result of cheating.