Is it because "so many people are traveling" that there is virtually no new (worthy) programming on Friday and Saturday of every Thanksgiving weekend? Just what is the conspiracy here? If there was ever a time that desperate people needed to turn on the TV to watch something good to get out of interacting with their horrific families, it is this time of the year. Perhaps it's self-fulfilling: people will watch anything to get away from their families so why not give them scraps? Even the movie options on TV this weekend are very poor, it's like some kind of punishment. Then Sunday comes along and we've got an avalanche of great TV that is very difficult to watch in real time, including the mid-season finale of "The Walking Dead" (which is fantastic) and the season premiere of "After Lately" (on E! at 11pm).
—- 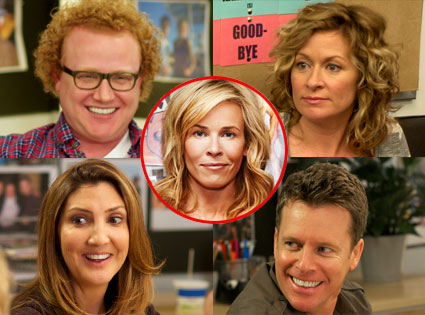 The second season of "After Lately" premieres on Sunday at 11pm on E!
Not only is the season premiere of "After Lately" on this Sunday at 11pm, there is a new episode of "Chelsea Lately" tonight, unlike every other late night show that has chosen to broadcast reruns. This season of "After Lately" promises to be excellent and from the premiere episode that I saw, "Grandpa Franjola," it seems like the crew of comedians and writers behind the highly successful "Chelsea Lately" have a lot of experiences to mine from. From my conversations with series writers/performers Chris Franjola, Jen Kirkman, Josh Wolf, and Sarah Colonna, there's a kernel of truth in each of the storylines presented in the show and it's that reality that makes the show so funny. While it's clear to me that everybody is playing an exaggerated version of themselves, there are some fans of "Chelsea Lately" who think that what happens on "After Lately" is some kind of reality show which, while it might be distressing to the cast, is actually an indication of what a good job they are doing.

I don't think I'm giving anything away since it's in the published summary of the premiere episode all over the web, but Chris Franjola is put on the spot as a possible grandfather when he didn't even know he might be a father. Any male in their late 30s or early 40s who hasn't kept track of their girlfriends or one night stands from previous decades has, in the back of their mind, a tiny bit of fear that they might have fathered somebody or something - Chris plays off of this fear quite admirably and hilariously. The guest star on Sunday is Jenny McCarthy who also plays a version of herself as a very aggressive advocate for people with autism and I hope we'll be seeing more of that. I don't think that McCarthy has enjoyed being pushed into the position of "that crazy autism lady" so it must have been enjoyable to play off of that persona. For more on the behind-the-scenes with the guest stars at "After Lately," check out Heather McDonald's very fun guest blog post on AOLtv.

It's been fun keeping up with show happenings the past couple months following the "After Lately" Facebook page, but also Chris Franjola and Josh Wolf on Twitter, who have been great about posting cell phone pics from the set where they, along with everybody else on the show, wear multiple hats to get this little late night Sunday gem on the air.
—-
I'm sad to report that LA18 anchor woman Jean Yoo died of an apparent drug overdose last weekend with her body being found Monday night. Police are calling it suicide but friends at the Korean-language news program where she worked say that nothing was amiss with her. What's also weird is how little coverage this story has received in the LA Times and other news sources.
—-
On a funnier note, there is a petition out for Fox News host Megyn Kelly to consume a serving of pepper spray after Kelly said in a discussion of the UC Davis police brutality incident on "The O'Reilly Factor" that defensive pepper spray is "a food product essentially." You can sign the petition here. While it's important to note that people who watch Fox News are more ignorant about world events than people who watch no news programs at all, it's also important to note that this is because of Fox News employees like Kelly who willfully spread lies and misinformation.
—-
The TV Junkie Must-Watch Plan: Tonight - "Master Chef: A Special SoCal Connected," "The Soup," "Fashion Police," "Chelsea Lately." Saturday - "Unwrapped," "Fanboys," The Browning Version. Sunday - "The Walking Dead," "Hell On Wheels," "After Lately," "Dexter" (on late rerun), "Homeland" (on late rerun), "Hung" (on late rerun)

10:00pm The Soup E! - This is your last chance to see Joel McHale and Co. on Friday nights before they move to Wednesdays.

1:30am The Browning Version TCM - (1951) A British schoolmaster (Michael Redgrave) retires with dignity, despite illness and his unfaithful wife (Jean Kent).

9:00pm The Walking Dead AMC - Pretty Much Dead Already Secrets are told and revealed; Hershel refuses to acknowledge the world's new reality; Andrea comes out of her shell; everything is food for something.

9:00pm Dexter Showtime - Get Gellar Dexter gets help from an unexpected source; Debra learns something about herself in therapy.

9:00pm The Next Iron Chef: Super Chefs Food - New York on a Plate Storytelling is the next test; each chef is assigned a different location in NYC.

10:00pm Homeland Showtime - Crossfire Brody relives his captivity; Carrie is in the middle of a public relations nightmare.

10:00pm Hung HBO - A Monkey Named Simian; Frances Is Not a Fan Tanya finds out that she is not invited to Frances and Mike's wedding; Ray retrieves his clients; Tanya bonds with Charlie's sons.