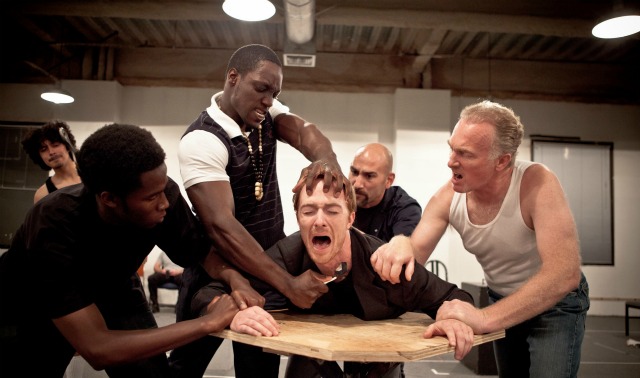 The Short Eyes ensemble is affecting, passionate, and vividly absorbing. The cast brings tremendous depth to Pinero's characters ensuring that they avoid stereotypical cliches. David Santana is stoic, endearing, and compelling as Juan — a realism-driving role that balances the institutional craziness of the other characters. Matthew Jaeger perfectly portrays remorseless sex-offender Clark with a degraded, hunted aura of fear and confusion. Mark Rolston is enthralling, frightening, and full of fire as Longshoe. Jaeger and Rolston are brilliant and captivating together at the peak of the play's action. Carl Crudup has excellent comedic delivery as Ice, a role he dresses with charm and the finesse of a seasoned actor. Jason Manuel Olazabal blends machismo and desperation to craft a truly chilling portrayal of Paco. Matias Ponce is appropriately adorable and scintillating as Cupcakes. Together, Olazabal and Ponce have notable, somehow ironic on-stage chemistry. Donte Wince is incredibly energetic and intense as the dogmatic El Raheem, proving his versatility as a performer as El Raheem becomes increasingly complex. Miguel Amenyinu is eager and steadfast as Omar. Finally, Cris D'Annunzio pits passion and aloofness against one another for the role of old-timer Prison Guard Mr. Nett.

Under the exceptional direction of Julian Acosta, Short Eyes exudes realism, richness, and depth. From the dissonant, jungle-like cacophony of the opening scene to the in-your-face violence, this play is utterly transportive. Mike Mahaffey's fight choreography is believable and adrenaline raising. Geronimo Guzman's set is satisfying, authentic, and full of careful detail. Short Eyes premiered in New York in 1974, but remains contemporary, timeless, and unforgettable. Missing an opportunity to see this fabulous, impressive, and meaningful production would be truly tragic.

Short Eyes is playing at Los Angeles Theatre Center through Sunday, December 18. Tickets are available online, at the box office, or via phone at 866-811-4111.