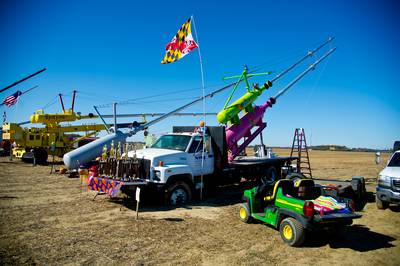 Discovery Channel's annual Punkin Chunkin fest starts at 8pm Thanksgiving night. Last year the all-female team walked away with the glory, can they repeat?
This is the Thanksgiving edition - we'll be back on Friday. While there wil be plenty of Thanksgiving-themed programming tomorrow (Macy*s Parade, Charlie Brown, etc.) there's probably nothing more fun to watch while on an l tryptophan and Sauvignon Blanc high than Discovery Channel's "Punkin Chunkin 2011" which will feature an assortment of insane-looking and probably very dangerous catapults and trebuchets and their possibly drunk but definitely insane operators. The fun starts at 8pm tomorrow night.
—-
We highlighted some of the many TV show marathons in the TV Junkie Must-Watch Plan below but if you're looking for more fun things to watch, check out season 3 of Illeana Douglas' "Easy To Assemble" web series which is well under way. If you're not familiar with this very funny show, the previous seasons are online so it's easy to catch up. In short, the premise is that Illeana has decided to forgo her acting career to instead work at an IKEA in Southern California. Frequent regulars are Justine Bateman, Greg Proops (whose FREE live podcast is tonight at 7pm at Bar Lubitsch in West Hollywood - go already!), and the amazing Jeff Goldblum among many others. The series is best viewed HERE but I've included the first episode of this season at the end of this post - there are 10 episodes for this season, make sure you watch them in order.
—-
On Monday we published our interview with comedy genius Maria Bamford, today you can get our Channel Zero podcast interview with her:

Thank you for listening, please subscribe on iTunes and please rate! See you Friday!

9:00pm NOVA PBS SoCal/KOCE - The Fabric of the Cosmos: Universe or Multiverse? Scientists believe there may be more than one universe.

9:30pm Happy Endings ABC - Full Court Dress Alex offers to design Jane a dress for her charity event; Penny helps Max babysit; Dave and Brad realize their new friendship with the mailman isn't all it was cracked up to be.

6:00am Arrested Development Marathon IFC - The Bluths! All day long!

9:00am The Twilight Zone Marathon The CW/KTLA - All day, hot Rod Serling action.

8:00pm A Charlie Brown Thanksgiving ABC - The Peanuts gather around Charlie's pingpong table for an unusual feast; a bonus cartoon is "This Is America, Charlie Brown: The Mayflower Voyagers."

8:30pm A Night at the Opera TCM - (1935) Groucho (Groucho Marx), Chico and Harpo go to Italy and bring opera and its patrons down to their level.

10:30pm Monkey Business TCM - (1931) Groucho, Harpo, Chico and Zeppo (The Marx Brothers) stow away on an ocean liner and try not to get caught.