Many many props to Questlove, The Roots, and "Late Night With Jimmy Fallon" for playing Fishbone's "Lyin' Ass Bitch" as Michelle Bachmann's intro song last night (see above).
—- 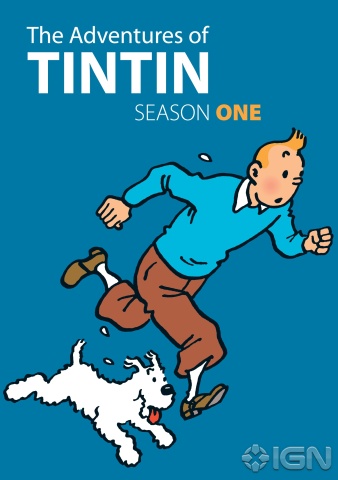 Season One of "The Adventures of Tintin" is released on DVD today for the first time in the US
Today Shout Factory released Season One of The Adventures of Tintin on DVD. This series has never been made available on DVD in the United States and it hasn't been seen in this country since it originally aired on HBO and a subsequent round of reruns on Nickelodeon in the early 1990s. This version of the beloved books strictly and consistently adhered to the artwork of the characters' creator, Hergé, and this first DVD set includes interpretations of 7 of the 20 original Tintin stories.

Of course we have Steven Spielberg's 3D version of Tintin coming out in the United States in December but anyone who has ever seen a Tintin book can see that Spielberg has a very different visual take which may or may not be a disappointment to fans of the beloved Belgian boy reporter and his trusty dog, Snowy. If you love the books and haven't seen this TV adaptation, I urge you to check it out before going to spend money on Spielberg's 3D version. While it's true that the stories on these DVDs are reduced to an hour long, the traditional animation techniques, using panels transposed from the original books, may be more pleasing/less jarring to the eye than what I expect Spielberg's film to be. From what I've seen it reminds me more of Robert Zemeckis' The Polar Express and I'm not sure that's a good thing.

Shout Factory has yet to announce when they will be releasing Seasons Two and Three but I sincerely can't wait to see these gems finally available in the United States.
—-
NBC has pushed its Sarah Silverman project from script to pilot (which it kinda had to per the terms of the deal) and I'm both happy and concerned about that. Will this be a series where NBC backs away and allows Silverman to push the broadcast envelope or will there be a lot of network interference post-pilot? Will this be one of those: "We wanted to do this, which would have been great, but the network made us water it down" situations?

Look at what NBC is doing to "Community" creator, Dan Harmon, who worked with Silverman on her Comedy Central show. He adapted, acquiesced, and played along with the network at every step, making compromise after compromise, and they still pulled his show off the air (for the time being). Also, I love Silverman because she is so out there, willing to test the limits on stage and in programming (look at her stellar performance in last week's episode of "The League") - is her sense of humor what NBC expects to connect with Kansas? Now I've made myself more worried.
—-
The best stuff on TV last night was on HBO and I hope they stick with putting excellent programs on Monday nights. "Bored To Death" was incredible yet again (see creator Jonathan Ames explain it in the video at the end of this post), with references that ran the gamut from Cervantes to an incest romp worthy of Oscar Wilde. On a completely different tragi-comedy note, "Enlightened" certainly pulled at the heartstrings with squirm-inducing scenes of horrific embarrassment that were incredibly important character-wise. It's obvious that Laura Dern has never done TV before because she doesn't phone it in for one moment.
—-
Reminder: Tonight Maria Bamford (check out our interview with her posted yesterday) will be at Kevin Nealon's show at the Laugh Factory tonight! Rescheduled for 12/6 Tomorrow, Greg Proops' live proopcast will be tomorrow night at Bar Lubitsch in West Hollywood, it starts at 7pm and it's FREE.
—-
The TV Junkie Must-Watch Plan: "Frontline: A Perfect Terrorist," "Sons of Anarchy," "Chelsea Lately," "Chelsea Lately," "Late Show With David Letterman," "The Late Late Show With Craig Ferguson"

9:00pm Mysteries at the Museum Travel - La Raid; Bioterror; Automation Don uncovers a the story behind a work of art; a religious cult warning; a future robot hero.

10:00pm Sons of Anarchy FX - Burnt and Purged Away SAMCRO negotiates with the Irish Kings to secure the club's future.

10:00pm Covert Affairs USA - Horse to Water After an asset is killed, Annie must investigate the daughter of a former CIA analyst.

10:30pm Workaholics Comedy Central - 6 Hours Till Hedonism II The guys have six hours to get a passport for Blake.