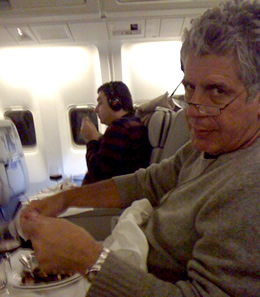 Anthony Bourdain's new Travel Channel show, "The Layover," premieres tonight at 9pm.
Last week was a shocker for "Community" fans and this week "Cougar Town" followers get a serving of disappointment as ABC unveiled its midseason schedule and the Courteney Cox sitcom is missing. The show has been juggled around the ABC schedule and delayed in the past but to be delayed again this late in the game is not good news. While I'm not the biggest fan of the show (the show has so much potential, like actually be about older women dealing with younger men), a lot of great people work on the show and we do get scenes with good writing and cast performances (Busy Philipps FTW!). I hope we get to see these people work again in TV very soon.
—-
Anthony Bourdain's new Travel Channel show, "The Layover," premieres tonight at 9pm with a quick visit to Singapore. "The Layover" was inspired by the countless 24-48 hour layovers that Bourdain has had to endure during his years of filming his other show, "No Reservations." "The Layover" answers the question: How can we get an authentic local experience in just one day? I'm not sure if Bourdain is covering a lot of new ground with this series but for Bourdain fans, like myself, the more Bourdain I can get, the better. [Also tonight: "Bored To Death" & "Enlightened" on HBO at 9pm, Miss Piggy + great roundtable on "Chelsea Lately" on E! at 11pm, and Ty Burrell of "Modern Family" and comedian Andy Kindler on "The Late Show With David Letterman" on CBS at 11:35pm.]
—-
"Portlandia" fans will want to go see the "Portlandia" tour that Fred Armisen is putting on. He brings the show to the Echoplex on January 17th, tickets go on sale tomorrow.
—-
This is a big travel week, obviously, but there will still be plenty of new TV so please stay tuned to this column to know what to watch as you deal with relatives and filled to bursting with turkey, tofurkery, or tacos. Please follow us on Twitter at @LAist and @TheTVJunkie for the latest.
—-
CNN's HLN (the old HeadLine News) has decided not to renew "The Joy Behar Show" and it will leave the air in mid-December. You may not like Behar's other show, "The View," and you may not like Behar's performance on her own show, but she was very brave in putting together panels that combined the best comedians, with very different views politically, and topic experts, for open discussions of the day's issues. This sometimes resulted in contentious arguments but a lot of the time it resulted in some great laughs. That segment always reminded me a bit of Colin Quinn's "Tough Room," and to have that kind of exchange on a news network was always a good thing so it's a shame to see it go.
—-
"SNL" moments of brilliance this weekend: Bill Hader as Garrison Keillor; and the final sketch, "Massachusetts Afternoon." It was moments like that, plus the Muppets, that helped tie its season high in viewership. Tell me about 2 better moments?
—-
The TV Junkie Must-Watch Plan: "Adventure Time," "Regular Show," "Bored To Death," "Enlightened," "Rock Center With Brian Williams," "Chelsea Lately," "Late Show With David Letterman," "Late Night With Jimmy Fallon"

8:15pm Regular Show Toon - Rap It Up Mordecai and Rigby agree to join Pops in a rap battle.

11:00pm Chelsea Lately E! - Miss Piggy guests and there will be a great roundtable, no doubt.