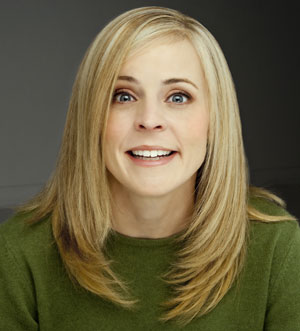 Comedy genius Maria Bamford provides many of the voices on Cartoon Network's "Adventure Time" (on tonight at 8pm)
The first thing that one notices in a conversation with comedian and voice artist (magician!) Maria Bamford is that she's an impassioned comedy enthusiast, interested not only in being a prolific producer of comedy for stage and TV, but also the history of comedy. We will be seeing a ton of Maria Bamford this holiday season as Target has reprised her crazy-for-Christmas lady with commercials that just started running last week. Speaking of running, how is it possible for someone to run in high heels as fast as Maria does in one of those commercials? She's amazing for that feat alone but we're also bowled over by the fact that she's worked insanely popular animated shows like "CatDog," "Arthur," "Hey Arnold!," "WordGirl," and recently "Ugly Americans."

After doing comedy and voicework for over a decade, including appearances on Conan O'Brien's "Late Night" and "The Tonight Show with Jay Leno," Bamford gained major attention after being part of the "Comedians of Comedy" tour and documentary film (2005) along with Zach Galifianakis, Patton Oswalt, and Brian Posehn. I was very fortunate to see Bamford's solo show, "Unwanted Thoughts Syndrome," and a showcase performance at the Just For Laughs festival this summer. Seeing her perform live is a treat as her ability to morph from one fully formed character into another must be witnessed in person. That being said, the "Unwanted Thoughts Syndrome" CD is a lot of fun and well-worth the listen. A venue to see Bamford at her most creative, perhaps, is her YouTube show, "The Maria Bamford Show," which has 20 hilarious episodes which I watched in succession (episode 1 is embedded at the end of this post). Los Angeles area residents are very lucky to have several opportunities to see Maria Bamford perform over the next few weeks: Tomorrow night (11/22) Kevin Nealon's show at the Laugh Factory; she will be part of Nick Kroll & Friends at the Largo on 11/29 (along with Bill Burr and Margaret Cho!); and at the Icehouse for Eagle Rock Fest on 12/11. For more information check out Maria Bamford's website.

We talked quite a bit about the history of comedy, bar comics vs "alt" comics, the horror of bombing in Pennsylvania, and her joy at being able to make a living at performing and the fact that she's able to do something that she enjoys - something that she would do even if no one else was watching [wait for our podcast which will include this discussion!]. Then we got into her work on the Cartoon Network's "Adventure Time," quite possibly the weirdest show on TV right now, outweirding even "American Horror Story." Yes, I watch "Adventure Time" with my kids but sometimes there is an adult context to certain scenes, double meanings, and strange actions that get looped as animated gifs all over the web. Our two protagonists, Finn and Jake, a boy and his magically stretchy dog, inhabit the land of Ooo and are into having a good time and helping out fellow creatures in a world called "post-apocalyptic" by series creator Pendleton Ward. Definitely check out the wiki to get into some of the potential deeper meanings in the show.

Bamford has provided a ton of the incidental voices on the show, including, but not limited to, Manfried, Slime Princess, Guardian Angel, and the Duchess of Nuts. Bamford told us about how she got into the show and what she does to prepare for these characters (see the interview below and look for our Channel Zero podcast with her).

What is the chicken or the egg of the show? Do you get to see drawings first or are you asked to provide some ideas? What kind of input do you have?

Maria Bamford: I will sometimes make [up a character] and they will say, "No thanks, we just want a high voice, that's it." [Laughs] I do get to do a lot of different ones though, it's really fun, I get to improvise. For me, when I'm improvising, I write things down before the show but that's a hard thing too, because I really want to prepare but sometimes there's no time. Right now I'm taking off four months from the road which is great because I can take the time, read over the storyboards, and really enjoy it. It's sad that I don't always have the time to do that because it's a beautiful show. There was one we just did, where the Ice King took a part of each of the princesses, you know, an arm and a head, and makes a monster wife. The best part was that Pendleton said, "It's all about everyone being able to live together." [Laughs] It's so hilarious!

How did you get involved in the show?

Maria Bamford: The way I got the job was because my friends own an eyeglass store, the Society of the Spectacle, one of the best eyeglasses store in Los Angeles in my opinion ....my friends [Laughs]. And Pendleton came into the store with his mom, and I have my CDs and stuff for sale there, at my friends eyeglass store, and so my friends kind of put in a pitch - and I'm not sure that Pen knew me before! [Laughs] But here we are, serendipity!

What a great story!

Maria Bamford: Yeah, sometimes it comes down to someone in the neighborhood says, "Hey, she does comedy - why wouldn't you have her in that?" Or my mother getting me gigs.. [Laughs] No not that has happened, but since her whole life has led to one of my caricatures, I guess she is getting me a lot of work.

Your mom is great in "The Maria Bamford Show"!

Maria Bamford: I tried to pitch a reality show with her and I traveling across country providing mental health services for comedians. She's a licensed marriage and family therapist as well as being an Episcopal deacon, so we could put the Christian slant on it with me being the atheist. And then she would watch [the comic's] act and do a session with them. I pitched the idea to my parents, and they said they would want to do it but I feel like they say they'll do it because they say they love me. "We're worried Maria won't get any work" - so, they are my parents. I said, "Do you really want to do this, you're 70? Do you really want to hang out with me in a campervan?" I may try to pitch it again.

That's a great idea since there are so many comedians who need help.

Maria Bamford: Well, yeah! It's very difficult to get insurance when you're self-employed and an alcoholic. [Laughs] Well, that's not true. But, well, it's not the healthiest, because of the isolation, even if you're extroverted and kind of hang out with people. It wasn't easy for me, and even now when I get to fly and stay at a La Quinta, because I'm flush. It could be considerably worse than that.

Do you have a favorite character on "Adventure Time"?

Thank you for talking about this wonderfully weird show!

Maria Bamford: It's so much fun to do, and we have Tom Kenny who is also amazing! There are so many beautiful things in this show I just love looking at it. 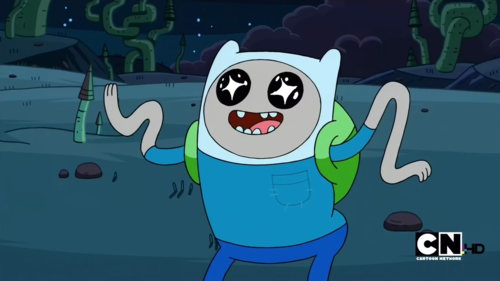 This is how one feels when watching "Adventure Time" and hearing Maria Bamford's voice.