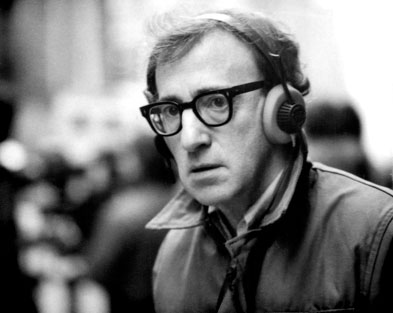 PBS airs the excellent documentary "Woody Allen: American Masters" this Sunday at 9pm.
I'm very pleased to report the dates for PaleyFest: The William S. Paley Television Festival which will return to the historic Saban Theatre in Beverly Hills from March 2 through 14, 2012. Shows that have been confirmed to participate are "American Horror Story," "Mad Men," and "Modern Family." Tickets go on sale on December 8th at the PaleyFest website.
—-
What were your best TV moments last night? There were some great moments in NBC's comedy block, particularly "Community" and "Parks and Recreation" ("women's lasers!"), but other than Zach Woods as President Lincoln, "The Office" was kind of flat, and "Whitney" was a yawner. The best moment in prime time was the very last scene of "The League" Thanksgiving episode which had (what should be) Emmy-nomination-worthy appearances by Sarah Silverman and Jeff Goldblum.

This weekend be sure to check out "The Soup" tonight as they will be moving to Wednesday nights very soon and Don Rickles will be on "The Late Late Show With Craig Ferguson." Jason Segel hosts "SNL" this Saturday [please Lord, make this a good episode] and Sunday we've got the drama traffic jam of "The Walking Dead," "Hell On Wheels," "Boardwalk Empire," "Dexter," and "Homeland" as well as the fantastic documentary "Woody Allen: American Masters" on PBS at 9pm. So much good TV!
—-
The American Music Awards are this Sunday and I've included a streaming live player of the red carpet at the end of this post. The Coca-Cola Red Carpet LIVE! broadcast starts at 2pm on Sunday, be sure to bookmark this post and see who walks the red carpet.
—-
This Monday we mused that "Dexter" may have gone off the rails a bit this season but it's still doing well enough for Showtime to renew it for 2 more seasons, most likely the final seasons of the show.
—-
NPR is teaming up with BBC America to produce a TV special version of their "Wait Wait... Don't Tell Me" radio quiz show. The special will air on December 23rd and will be a review of 2011's news and events. As a fan of the show, this could be great or it could be a colossal failure - but I'll be watching to see how it turns out.
—-
The TV Junkie Must-Watch Plan: Tonight - "Nikita," "Fringe," "The Soup," "Fashion Police," "Late Show With David Letterman," "Late Late Show With Craig Ferguson." Saturday - "The Graham Norton Show," "Saturday Night Live." Sunday - "America in Primetime," "Hell On Wheels," "Dexter" (on late rerun), "Homeland" (on late rerun), "Hung" (on late rerun)

8:00pm Nikita The CW - Fair Trade A plan to identify the members of Oversight goes awry when Sean captures Birkoff; Alex tries to get back into Russia.

8:00pm Chuck NBC - Chuck Versus the Business Trip Chuck and Sarah track an assassin who is trying to eliminate the new intersect; Morgan tries to adjust to having the intersect; Jeff exposes a new side of himself.

9:00pm Fringe PBS SoCal/KOCE - Wallflower The team investigates the case of a man who turned white after being killed by an invisible force; Olivia has migraines.

10:00pm Boss Starz - Remembered In an attempt to keep the upper hand, Kane and his camp hide information from the media.

10:00pm The Soup E! - Last chance to see Joel & Co. on Friday nights before they move to Wednesdays.

10:30pm Fashion Police E! - Joan Rivers rips fashionistas a new one for yet another week.

9:00pm The Walking Dead AMC - Secrets Glenn knows too much for his comfort level; Daryl finds a sign of life and tries to make it back to the farm alive.

10:00pm Hell on Wheels AMC - A New Birth of Freedom Cullen is diverted in the search of the sergeant; Durant organizes a search party to find Lily Bell.

10:00pm Hung HBO - I, Sandee; This Sex. Which Is. Not One. Tanya discovers that Charlie has skipped bail; Lenore declares war on Tanya; Sandee advises Jason; Ray worries about his ability to please women.

10:00pm Homeland Showtime - Achilles Heel Carrie and Saul get surprising news; Brody and Jessica learn they are guests of honor at a party.