LAist Interview: Anna David, Author of 'Falling For Me' 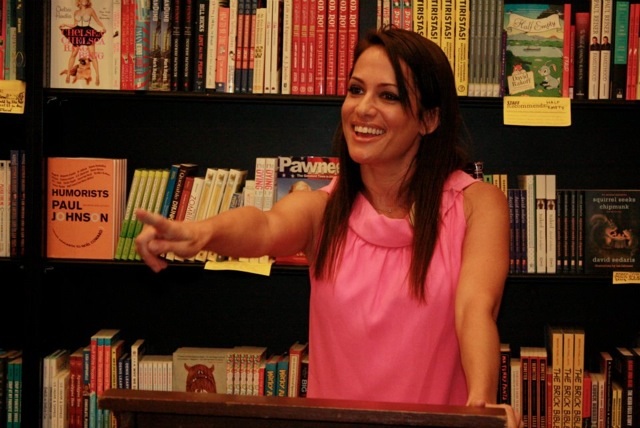 When local author Anna David set out to follow the advice in former Cosmo editor Helen Gurley Brown's 1962 book, "Sex and the Single Girl," she hoped that in the tome of a controversial magazine guru, she'd find the unlikely key to love and happiness.

Instead, in her new book, "Falling For Me," David details the bumpy ups and downs of adhering to the wisdom of a woman who once wrote that, "you may have to have a tiny touch of anorexia nervosa to maintain an ideal weight." In following Brown's advice, David redecorates, learns to cook, buys a new wardrobe, tries speed dating, and ultimately flies, solo, to Seville, Spain.

Here, she talks to us about her life pre- and post-Brown, why she moved back to L.A. from New York, and what advice she now has for single ladies.

LAist: When you first began following Helen Gurley Brown's advice, did you know that you were going to put your experiences into a book?

Anna David: I did. An anthology about reality TV that I edited had just come out, and at the same time I had fallen in love with a married man [the relationship never moved past the platonic]. I was having a full-on breakdown the likes of which I had never had before, and my publisher was saying, “we think that you should start doing nonfiction now, and what do you think of ‘Sex and the Single Girl’? Would you ever want to do a retelling of that?” And I just thought, "I don’t know how to live my own life right now, the last thing I am capable of doing is writing a book telling other women how to live."

But I started reading it, expecting it to be the antiquated version of the rules - “if you’re single, there’s something greatly wrong with you” - and so it shocked me that it was just the opposite, and it literally pulled me out of my depression. I thought that if just reading it made me feel better, imagine what doing it would be like. So yes, I did know I was going to write the book but I didn’t know how it was going to turn out.

LAist: What did you expect to happen once you had dutifully followed all of Brown's suggestions?

AD: The truth is, I fully expected that I would make all of these changes, and then the perfect man would present himself and be like, “I love you because of all these fantastic changes!” I thought that for a while.

It didn’t happen. I did meet a guy when I finished the book but he was not The One.

LAist: I liked that it didn’t turn out how you expected.

AD: I didn’t like it at first, but now I like it. Once I got over the idea that I had failed, I realized that the truth was that I had never bothered to do any of these things for myself because I didn’t think it mattered. I didn’t think it mattered to make my apartment nice, for instance, even though I spend 90% of my time there. I wasn’t going to make it nice because I thought, “what does it matter, my life hasn’t started yet.” I think that’s something that plagues a lot of women of my generation.

LAist: I thought that was an interesting point, the idea of waiting for the perfect everything — man, job, baby, whatever — before you start taking care of yourself.

AD: My mother’s generation was the first to say, you don’t have to cook, you’re liberated! So I grew up not learning how to cook, and thinking it that it was some great gift that I didn’t know how to decorate, because I was a liberated woman. They didn’t tell us — because they didn’t know — that hey, you’re not going to go from your parent’s house to your husband’s house. You’re going to have a life on your own, and here’s how you should build it.

LAist: What was the biggest change that "Sex and the Single Girl" encouraged you to make?

AD: The biggest change, I would say, is that I was so scared to try new things, and I didn’t realize I had sort of decided that I was only going to do things I’m good at or that I have experience with. I didn’t want anyone seeing me trying anything I wasn’t good at. But my life had become really small because of that. While I was writing the book, I did so many new things that a lot of that fear is gone for me now.

LAist: That’s awesome. So you’ve recently moved back to L.A. from New York?

AD: Yes. I love L.A. I had all these ideas that I couldn’t come back here until I could buy a big house or until I had a husband and child, and I think if I hadn’t done this book, I might have continued to think that. It really got me to think about what scares me, what I want, what makes me happy, and I just basically woke up and said I don’t want to live here in New York anymore, and I wanted to be in L.A. the next day.

LAist: How is the dating scene different in New York and L.A.?

AD: I don’t think there is a massive difference in the dating scene between New York and L.A., I think you find whatever you think you’ll find wherever you go. For me, one result of this project is that I started to realize that I just get swept off my feet by these charming, emotionally unstable men, and they are never going to stick around or make me happy. So it’s not about being 3,000 miles in one direction or the other, it’s about looking for something different.

LAist: Was there any part of the book that really stood out to you as your favorite, or a part that had the most profound impact on your life?

AD: I think the most amazing experience was going to Seville. I do not travel well — I am somebody who really likes being in her bed with her cats and knowing her way around and having people speak her language, so it was really a leap of faith that I took, and I’m still shocked that I took it. But it was completely magical, and I think because it was sort of the culmination of the entire thing - I had been doing all these Helen lessons and changing my life and then I just sort of took it on the road. It made me not scared of anything.

LAist: So are you keeping up with everything else?

AD: The decorating and cooking, yes, I really am. The trying new things and putting myself together I have to say I’ve sort of slacked off on that. I’m a freelance writer who likes to work out which means I’m in yoga pants a lot of the time.

LAist: So now that you’re back, do you have any favorite L.A. spots?

AD: Yes! I go to Liberation Yoga on La Brea, and I love Cafe Midi, next to American Rag. I get a salad there that has no business even being called a salad - it has bacon, potatoes, and goat cheese in it. Bricks and Scones is a beautiful cafe that is hands down the best place in L.A. to work. Joan’s on 3rd has the best food, as far as I'm concerned. And Olympic Spa is a great place to decompress.

LAist: If you had one piece of advice to give readers - about dating or just about life - what would it be?

AD: It would be to just know that where you are is exactly where you’re meant to be. Stop allowing society to tell you what you should and shouldn’t be doing, and just know that you are perfect where you are. Lamenting the fact that you’re not at a certain stage is only going to prevent you from getting there; it’s not going to help.

LAist: Are you dating anyone now?

AD: Not any one person. But I don’t think that finding The One and all of that is the ultimate answer to happiness anymore.