Their march and rally began at 7am at the Bank of America Plaza on S. Hope Street, calling on Congress to make Wall Street accountable for fixing the economy as well as demanding jobs, not cuts.

The protest permit ended at 8:20am. Apparently, the march is behind schedule. Protesters plan on doing "acts of civil disobedience" in the intersection. Arrests are likely, and people have already volunteered to be arrested.

L.A. protests are slated to occur throughout the day, including a second downtown march starting at the civic center at noon. Similar protests are taking places in cities around the country, including New York, Chicago, Washington, DC, Seattle, Minneapolis, Milwaukee, Houston and Miami. 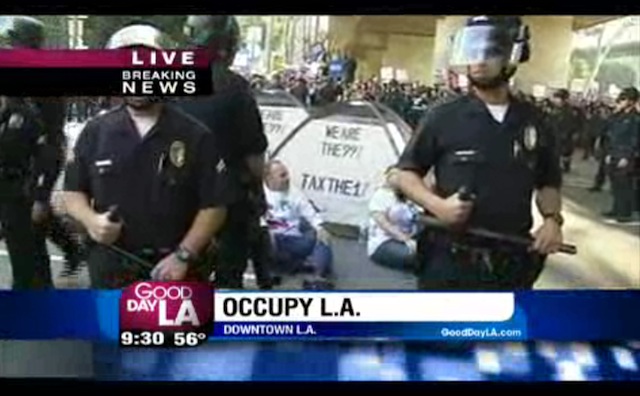 Photo by @SLSmith via Twitpic

UPDATE 10:05 AM A total of 23 arrests were made, according to the LAPD's Cpt. Andy Smith, who said the police's intervention in the planned protest was "successful." More protests are slated to take place today in Los Angeles and other cities.

UPDATE 9:58 AM The crowd has been asked to remain on the sidewalk, and that announcements are forthcoming.

UPDATE 9:47 AM More than half of the arrests are complete. A crowd is still gathered on the sidewalk, being led in chants and cheering each arrest.

UPDATE 9:41 AM All of the tents set up in the intersection have been removed. The LAPD officers are speaking to each arrestee and encouraging them to physically cooperate with the arrest rather than being carried. An organizer leads the chant: "This is what democracy looks like" and then "Rebuild L.A.!"

UPDATE 9:37 AM The third person arrested goes slack, is carried away by four police officers.

UPDATE 9:34 AM An elderly woman is the first to be cuffed and arrested. As the chants continue, protesters are arrested one by one. About 18 people are putting themselves up for arrest.

UPDATE 9:31 AM: With excess people cleared from the center of the intersection, what remains at the core of 4th and Figueroa is a line of protesters with linked arms in orange and yellow vests, and also a circle of protesters in while hand-markered shirts with slogans who are seated in a circle with linked elbows. These are the protesters who volunteered themselves in the organization protest as those willing to be arrested. As the LAPD moves through the stages of their standard dispersal of an unlawful assembly, so long as the protesters remain in place, arrests will begin shortly.

UPDATE 9:14 AM A protest organizer speaks from the loudspeaker to let all participants know it's time to move back and be peaceful. The LAPD, as expected, declare the protest an "unlawful assembly" and order the crowd to disperse. "You break up this assembly. If you do not do so, you will arrested, or subject to other police action." This announcement is standard in these situations. The LAPD offers a list of suggested routes for dispersal. The same announcement follows in Spanish.

UPDATE 9:04 AM: Protesters lay out banners as the LAPD approach the group in the center of the intersection and work towards issuing the dispersal order and making arrests.

UPDATE 8:54 AM: The LAPD prepare to issue the dispersal order and declare the protest an "unlawful assembly." At this point they're just waiting for the go-ahead.

UPDATE 8:45AM: A group of 18 protesters who have volunteered to be subject to arrested formed a circle in the center of the intersection, and tents have been set up in the middle. A Los Angeles Police Department Deputy Chief, when asked by KTLA's Eric Spillman on the Channel 5 Morning News, said the protest would not be allowed to last much longer. Minutes later, the LAPD began to make strides to clear the intersection, as the crowd drew back, and the 18 designated protesters remained in the street, ready for arrest.