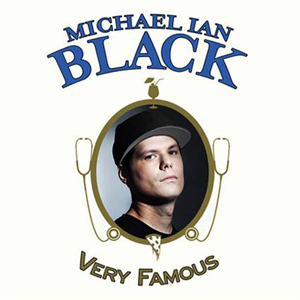 We talked about his preparation and recording of his most recent and excellent CD, Very Famous, which I highly recommend as well as the creation of the #SadSadConversation YouTube channel which he collaborates on with Joshua Malina, Steven Weber, Sarah Thyre, Martha Plimpton, Steve Agee, Jane Wiedlin, and many other notables. LA is very lucky tonight to have Michael Ian Black performing at the Largo! Tonight! There were still tickets available as of this morning - the Largo is a fantastically cool and intimate place to see Black, and with his history in television and film, there are sure to be plenty of his friends there.
—-
The extremely funny Zach Woods who plays Gabe in "The Office" is one of the nicest guys in the business and you should see him at UCB if you ever get the chance. He's doing some very funny web pieces for Excedrin and I've included it at the end of this post.
—-
The Hollywood Reporter has a nice little interview with Nick Offerman aka Ron Swanson of NBC's "Parks and Recreation" that I suggest you read.
—-
Comedy Central has renewed "South Park" through 2016. It's not a show I watch regularly but it always makes me laugh every time I tune in. Congrats to Trey Parker and Matt Stone.
—-
The TV Junkie Must-Watch Plan: "Nature," "Modern Family," "Happy Endings," "American Horror Story," "The Daily Show With Jon Stewart," "The Colbert Report," "The Late Late Show With Craig Ferguson"

8:00pm Up All Night NBC - Hiring and Firing Ava worries Reagan has lost her edge, after she is unable to fire someone; Reagan and Chris look for a babysitter.

9:00pm Modern Family ABC - After the Fire After a fire destroys a neighbor's home, the whole family tries to help by organizing a community drive.

9:00pm MythBusters Discovery - Wet and Wild The wettest myths of all time include riding the world's largest waterslide, deep-sea diving in a suit of armor, and swimming in syrup.

9:30pm Happy Endings ABC - The Code War The return of Max's high-school girlfriend affects everyone in the group differently; Jane tries to find herself a work husband.

10:00pm American Horror Story FX - Open House Moira persuades a buyer to make an offer while Constance and Larry work against her efforts.

10:00pm South Park Comedy Central - The Poor Kid Kenny ends up in foster care after his parents are arrested.

10:30pm Nick Swardson's Pretend Time Comedy Central - Legalize Meth Comedians Owen Benjamin and Duncan Trussell join Nick when he discusses sketches that didn't make it to the show; drunk girls cause problems in a fast food restaurant; a first-time dad gets upset about visitors in a hospital baby nursery.