Seasonal Eats: Get Pumped About Pumpkins! 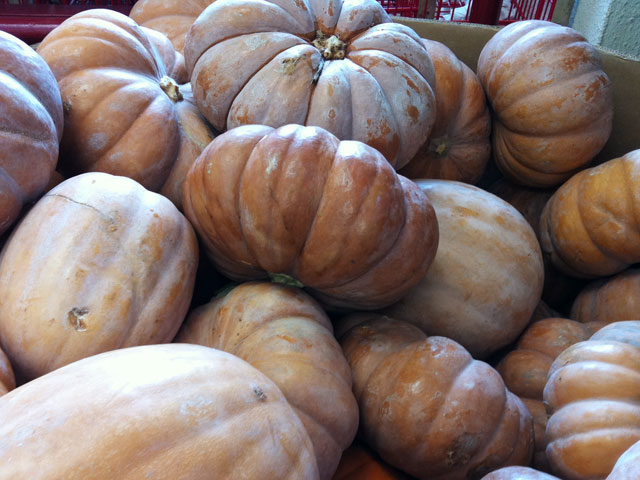 With Halloween, we usher in a huge annual harvest of pumpkins that grace holiday tables winter-long. Though they are often carved into jack-o-lanterns, historically believed to ward off demons at Halloween, many varieties are thicker, juicier and more flavorful than typical Halloween pumpkins and make delicious, hearty meals.

Pumpkins are a gourd-like squash that are native to North America, with the oldest evidence of seeds found in ancient Mexico. Raw pumpkin has a glycemic load of 3, with anti-inflammatory properties due to its main nutrients of lutein and both alpha and beta carotene. Pumpkins are also a very good source of Vitamin C, Vitamin E, Riboflavin, Potassium, Copper and Manganese, and a secondary source of Thiamin, Niacin, Vitamin B6, folate, Pantothenic Acid, Iron, Magnesium and Phosphorous.

In the area of stews and curries that can work as both sides and entrées, try creamy pumpkin and cashew curry or this tasty pumpkin curry with chickpeas. How about a stir-fry, like stir-fried pumpkin with chiles and basil, or slow cook a pumpkin and black bean chili.

Some other interesting side dishes with pumpkin flavor include pumpkin, pancetta, potato hash, or maybe this pumpkin couscous. Try out a savory tart, such as pumpkin, spinach and goat cheese tart or pumpkin, spinach and feta tart. This Italian snack of pumpkin polpette with chopped pistachios sounds interesting, and pumpkin cheddar crackers sound downright delicious!

As for Italian fare, pumpkin figures prominently in stuffed pastas and risottos. Stir it up into pumpkin risotto or mix it into pumpkin gnocchi. For filled pastas, try out a lemony pumpkin agnolotti with wonton wrappers, boiled pumpkin ravioli or this pumpkin ravioli with sage butter that is fried after boiling.

Due to the shape of pumpkins, there are many dishes that can be made inside the shell, cooking the pumpkin flesh in the process. Check out pumpkin stuffed with vegetable stew or this lovely pumpkin soup in a pumpkin. I made my own version last year, which turned into 2 meals from one pumpkin: baked pumpkin soup and savory pumpkin pie. You can also bake a cake in a pumpkin or make these baked pumpkin with brown sugar egg custard in small pumpkins, which sounds fascinating!

Pumpkins naturally have a sugar content that sweetens up nicely into many favorite desserts. There are too many traditional pumpkin pies to mention, but some interesting variations include amaretto almond streusel pumpkin pie and pumpkin tart with anise seed crust. Or bake up these little pumpkin pear crisps. Pumpkins make a nice addition to cakes, such as apple and pumpkin upside-down cake or this double-trouble pumpkin cake with sage ice cream and pumpkin-cherry compote. Try these ginger pairings, like ginger pumpkin muffins or honey-ginger pumpkin butter. And for the gluten-free folks, there is allergen-free chocolate pumpkin spice cake or gluten-free pumpkin bread.

My own recipe this week is a savory pumpkin pie with a breadcrumb crust. Main instructions below, alternates and vegan options can be found here. 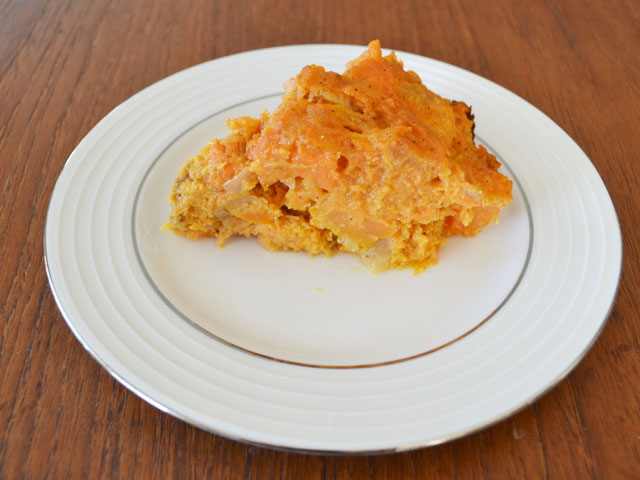 spice mix: 1 tsp each of cumin, coriander and chili powders

Roast pumpkin and sweet potato on an oiled baking sheet at 300º for 45 minutes. Cut pumpkin flesh from peel, scoop flesh from sweet potato skins, and roughly chop each into a mixing bowl. Mash with a fork to mix potato and pumpkin.

Turn oven up to 325º. Sauté the onions with butter, 3 minutes. add garlic and vinegar and simmer on low heat, covered, 20 minutes. Uncover and add the spice mix, sauté 1 minute more, remove from heat. Add sautéd onions, eggs and parmesan to the bowl. Stir with a fork to mix through. Grease a 9” baking dish and spread bread crumbs over the bottom. Add the filling and level the top. Bake 1 hour at 325º.