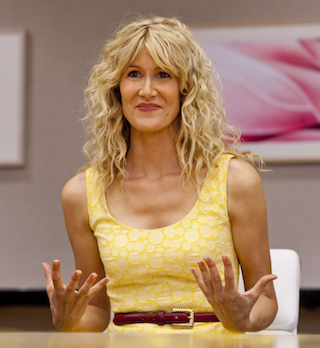 The delightful Laura Dern presents us with handfuls of problems in HBO's "Enlightened" tonight at 9:30pm after another excellent episode of "Bored To Death"
The Weekend Wrap-Up: About 6 weeks ago I wondered aloud here about what Emma Stone, at her tender age, has done to deserve a second gig hosting "Saturday Night Live" and I don't think this weekend's show helped dispel the mystery. An embarrassing start was Stone's monologue which was nothing much more than a commercial for the upcoming installment of the Spider-Man franchise. Favorite cast-member Bill Hader proved his worth, halfway into the show, by saving a sketch where he played an centenerian TV reporter and the always reliable Kristen Wiig managed to bring laughs every time she was onscreen but these moments felt too few and far-between.

The best moment of the night was extremely late in the show, the "Les Jeunes de Paris" sketch, which was hilarious and silly and required only a few lines of French dialogue at the opening of the bit. Ratings-wise, the episode of the 12th was the lowest of the season but still almost 10% above last season. You can be sure that the Muppets will pay "SNL" a visit when Jason Segel hosts next week, if that's what you're into.
—-
Has "Dexter" gone off the rails this season? [Spoiler Alert] Was Trinity already 2 seasons ago? It feels like a million years. It seemed like we were getting somewhere with Edward James Olmos and Colon Hanks but I feel the show took a turn for the worse last week when Dexter's psycho (and dead) brother made an appearance and took over as Dexter's discursive companion. This week the boys went on a road trip with Dexter partaking in some very casual sex (has he ever done that in the history of this show?) and some random behavior completely uncharacteristic of his character, and serial killers, if you've learned anything about them from the show, are creatures of habit.

Dexter had a special connection with his father, a pivotal one that has withstood the test of seasons of TV, but the "connection" idea was exploited and devalued in this experiment. Who else can we expect to pop into Dexter's head and start conversing with him throughout his day? Who's next, Rita? C'mon.
—-
Showtime's other Sunday offering, "Homeland," continued down its crazy path, with Claire Danes' Agent Carrie Mathison [Spoiler Alert] enjoying a romantic weekend at the lakehouse with her suspected terrorist boyfriend. It's like "Homeland" has become "Damages" on acid.
—-
Sunday was definitely not a wash, however, with excellent episodes of AMC's "The Walking Dead" and "Hell On Wheels," and HBO's "Boardwalk Empire," with the exception of Michael Pitt, everybody on that show is remarkable to watch.
—-
The TV Junkie Must-Watch Plan: "Bored to Death," "Enlightened," "Rock Center With Brian Williams," "Chelsea Lately," "Late Show With David Letterman," "Late Night With Jimmy Fallon"

9:00pm Bored To Death HBO - Two Large Pearls and a Bar of Gold Jonathan protects the wedding jewels of his ex; George and Ray become roommates.

10:00pm Hawaii Five-0 CBS - Ike Maka The physically altered corpse of an unidentified man is found in the trunk of a stolen car; Danno crashes on McGarrett's couch.