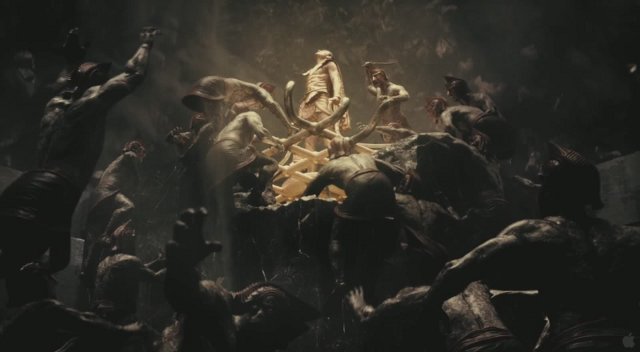 As an internet writer who thinks he's funny, I'm contractually obligated to trash Jack and Jill. But I can't do it. Adam Sandler's a smart guy; he spelled out his style of big, broad comedy with the title of his breakthrough role, Airheads. He's strayed into dramedy & family fare, but always comes back to be the box office boor. Whether he's a witless waterboy, a dorky Damian, a faux flaming fireman, a hare-brained hairdresser or, in Jack and Jill, a pupil of Tyler Perry's playbook (oh, for the days of Divine drag!), you can always trust Sandler to be Sandler. The tagline says it all: it ain't pretty, but if it's your thing, more power to you.

"Pretty" is also among the last words used to describe Greco-Roman war epics like Troy or 300. Immortals may turn that tide to play pretty (& pretty bad-ass) with pride. Director Tarsem's last film, the criminally underrated The Fall, is flat-out gorgeous, with lush colors & gleefully surreal scenarios. Immortals will more likely align with his earlier work The Cell, a mid-level mainstreamer infused with incredible imagery. The story is culled from tales of Theseus (Henry Cavill), who teams with a high priestess (Freida Pinto) and a lowlife thief (Stephen Dorff) to fend off the power-hungry King Hyperion (Mickey Rourke).

Across the nation, another noble quest is underway, as adult dramas seek your consideration in Oscar season. J. Edgar premiered earlier this month at AFI Fest, sights already set on the resident biopic spot. It's got an Academy-approved pedigree: Best Director Clint Eastwood, Best Original Screenwriter Dustin Lance Black (from another biopic, no less!) & multi-nominee Leonardo DiCaprio. But it isn't a lock yet. Many laud DiCaprio's performance as the intensely private head of the FBI. To others, this Hoover sucks.

Another look at law & order comes from the constantly chaotic Werner Herzog. His latest documentary, Into the Abyss, looks at the aftermath of a Texan triple homicide. One of the perps, Michael Perry, was sent to death row, while the other, Jason Burkett, received life in prison. The film contains interviews with both men, including Perry's last interview before his execution last year, as well as investigators, executioners & the families of the victims & convicted. Herzog told the LA Times earlier this year that Into the Abyss is neither an indictment of capital punishment nor a "platform for [Perry & Burkett] to prove their innocence". Rather, like many of Herzog's films, it offers a meditation on duality & the tenuous footing we hold over a savage nature.