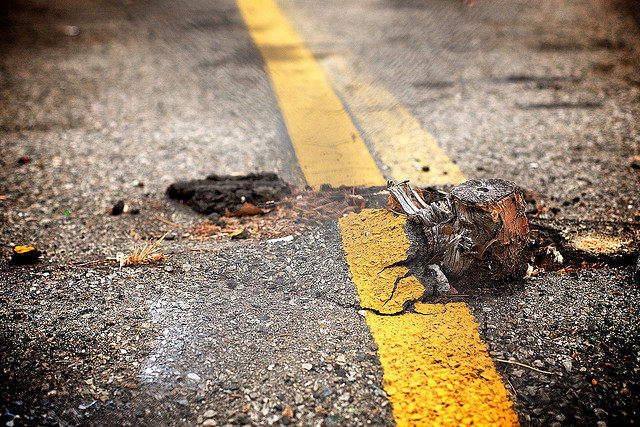 What's better than using a few years of tax revenue to fix Los Angeles' streets? How about using a few decades' worth!

Mayor Villaraigosa has been coming up with a plan — "quietly" the Los Angeles Times says — to use 27 years of Measure R revenue funding to fix up the city's streets and potholes. He calls it the L.A. Road Works initiative (which sounds like his fastracked 30/10 plan to speed up transit improvements in the city).

Los Angeles, like all cities in the county, gets a certain allotment of monthly revenue based on its population size in addition to funding rail and bus programs. That could add up to more than $2 billion over three decades. Fast-tracking that spending would allow the city to get a good deal on interest rates, do a bunch of necessary renovations all at once and employ construction workers, according to the mayor. It would also allow him to squeeze three decades of revenue it into his final years as mayor and take credit for well-kept streets.

Our streets need a little TLC. Bill Robertson, who ran the city's Bureau of Street Services until February, estimated that 1,000 of the city's 6,500 miles of streets are "failed" and in need of total reconstruction. He told the Times, "Any time you can get more money for roads and streets, it's huge. They've been neglected for 50 years."

"It not only makes every bit of sense to do it, but it would almost be foolish not to do it," said mayoral Deputy Chief of Staff Matt Szabo.

Not everyone is on totally on board yet. Councilman Bernard C. Parks wants to know what the trade-offs would be: Will spending money from future revenues end up being costly? And Councilman Mitch Englander said he wants to make sure that the mayor actually has a decent plan for fixing the streets — he wants to see major road reconstruction and not just city contractors throwing a patch of sealer on potholes. They both want this plan to be considered less "quietly" and get the public involved.

"This is their money," Englander told the Times. "I'd like to see the public's take on this before we take any drastic decision to tie us to 30 years of debt."