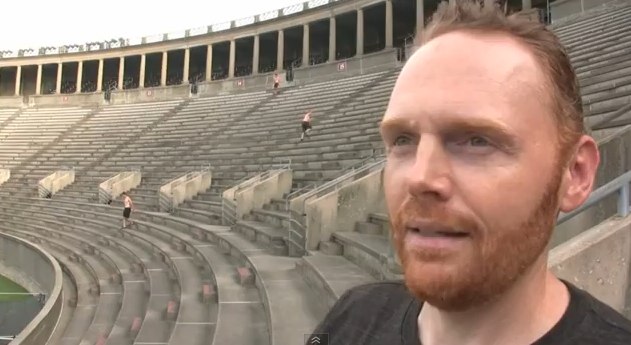 Bill Burr is one of many LA-based comedians heading to back east to perform at the New York Comedy Festival.

I didn't intend to make a direct comparison between the New York Comedy Festival and the LA Comedy Fest but since they are occurring at the same time it's a little difficult to avoid. With an emphasis on TV and short film screenings and precious little stand up, LA Comedy Fest seems to be more of a reflection of "industry" vs comedy performance. Yes, LA Comedy Fest is several days longer than NY Comedy Festival but the latter has multiple events per night spread out over 3 boroughs. A good-sized chunk of top-tiered talent has also left LA to go to NY to participate: Sarah Silverman, Norm Macdonald, Wanda Sykes, Bill Burr, Bill Maher, Kathy Griffin, the list goes on and on. Add to that the NY-based comedians like Louis C.K., Eugene Mirman, and Tracy Morgan, to name just a few, and you'll see that these are events of a very different calibre, not to mention sponsorship: Comedy Central is the flagship sponsor with dozens of major underwriters like JetBlue, etc.

The NY Comedy Festival is in its 8th year and I had a chance to get a couple statements from Caroline Hirsch, a founder of the festival and proprietor of the world-famous Caroline's comedy club, a place you must absolutely go to for a show when visiting New York.

How do you bring such amazing talent together for an event like New York Comedy Festival?

Caroline Hirsch: It's about working with a number of people I've worked with at the club level, and producing them in larger venues. There's quite a few women in this year's festival and we're glad that worked out with Wanda Sykes, Kathy Griffin, and Sarah Silverman, which was nice. We're excited to have Russell Peters at the club, he doesn't really work clubs, he works major major venues, so it's nice to have him doing a show at the club. It's an up close and personal show - I think people haven't seen him in a smaller venue like this in a long time. We're excited to bring the show to BAM with Sarah Silverman and producing Louis C.K. on Staten Island at the St. George Theatre. So we're expanding, you might say that this year the festival has really expanded to the outer boroughs.

It's interesting that so many comedians have gone to New York to make it big in the comedy scene and then they head to LA to get involved in TV. There's been a concerted effort to bring more TV back to NY, building facilities, offering tax breaks, and it seems like it is working. Do you think things will work out for comedians who don't want to go to LA?

Caroline Hirsch: There's been a bit of a shift as more and more TV shows are being made here. I think that a lot of writers and producers who want to remain in NY can remain in NY. A big reason why people went to LA in the beginning was the weather but now that doesn't matter as much anymore. Now we have two studios in Queens and one in Brooklyn and they are filled with TV production and of course, there are comedians who will be working in many of these.

I also had the chance to speak with the incredible Hannibal Buress. He's had some fantastic appearances on David Letterman's show after being a writer for both "Saturday Night Live" and "30 Rock." He's also participated multiple times in mega festivals like Just For Laughs and the New York Comedy Festival. This year, his regularly-produced Comedy at the Knitting Factory show is included as part of the festival so he's not just a performer but also a curator of an event.

You've had a lot of experience with events like Just For Laughs, the New York Comedy Festival, and you came to New York specifically to get involved with comedy. What's it about New York that is a draw for comedians like yourself.

Hannibal Buress: New York is the comedy capital of America, there's so many clubs and so many bars, so it's the place people go to in order to get better as a comedian - you have a chance to perform several times a night any night of the week. You can perform in front of any type of audience: an audience full of tourists, black crowds, mixed crowds, Latin crowds, any type of audience that you could think of is in New York, so there's a lot of valuable experience to be had.

Do you think there's a difference in the comedy climate between New York and Los Angeles? Is LA too "industry"?

Hannibal Buress: When I'm in LA I do shows at UCB, the Improv, or Meltdown. These are good shows, man, the best shows out there. People come out to laugh, it's fun, and there's no different feel for me. When I've gone out there I've done some really good shows and loved it so I don't really feel a difference but there's a difference in the number of venues, sure.

We'll be seeing more of Buress on the West Coast as he will be back this coming winter for pilot season as he revealed in an in-depth interview on Marc Maron's WTFpod. This guy definitely has the talent to power a show both as a creator as well as a performer.

Maybe that's what it comes down to between these two cities and these two events: opportunity and accessibility. Right now LA Comedy Fest is limited to one venue but let's say that it expanded to more: where would they be and how would you get there? This week at NY Comedy Festival you could catch a show at Union Hall on Manhattan, go uptown for another show at UCB or take a subway to Brooklyn for another event. You could go on foot from Bill Burr's show at Carnegie Hall over to a showcase at Caroline's. It seems impossible to imagine a similar arrangement in Los Angeles despite the concentration of talented people and an audience who loves comedy. I'm hopeful that LA Comedy Fest continues to receive support and expand and I urge you to check out their schedule to attend some of their very worthy events but it also seems like some of the monoliths of the LA-based entertainment industry are not doing their fair share in supporting a world-class event.