'Hope, Part II of a Mexican Trilogy' at LATC 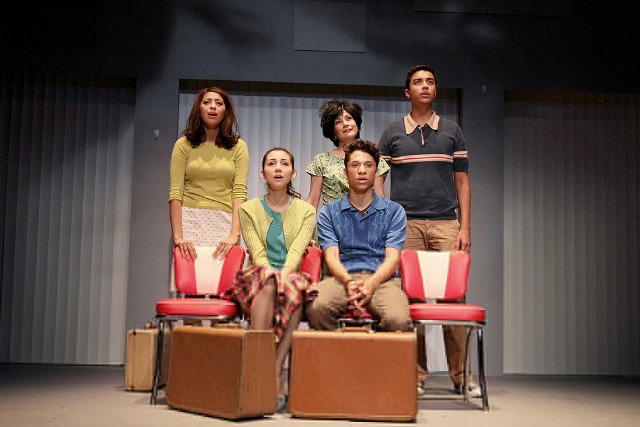 The ensemble flawlessly incorporates buttery, close-harmony songs from the 1950s and 1960s into their performance while executing perceptible but subtle choreography. Esperanza America Ibarra and Sal Lopez are cast standouts. Ibarra proves her range as a performer as Gina, a character that is widely different from her recent and brilliant performance at LATC in The Vault. She has a commanding stage presence, excellent comedic timing, and a strong singing voice. Lopez is subtle, seasoned, and compassionate in the role of Enrique. His voice is atypical but beautiful and full of warmth.

While Fernandez' Hope characters lack compelling depth, this detail is largely overshadowed by capable performances, direction, and high production value. Valenzuela crafts an aptly fragile atmosphere that is perfectly suited to the instability of the family and political dynamics reflected in the plot — he boldly frames darkness and sentient shadows with lightness and delicacy. The play is aesthetically delightful, fun, and intriguing with clever scenic design by Francois-Pierre Couture, discerning lighting by Cameron Mock, and gorgeous period costuming by Raquel Barreto.

We have seen cheesy choreography totally ruin otherwise good musicals. Movement Coordinator Urbanie Lucero's not only avoids this pitfall but gracefully enhances the show with subtle and tasteful gestures. Note that Hope is part of a trilogy but works perfectly as a stand-alone play as well.