Will 8,400 People Per Day Ride the Downtown Streetcar? 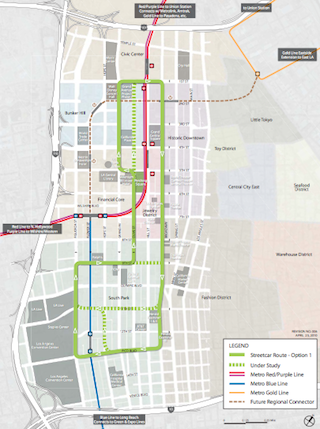 One of two proposed routes; download full-size .PDF maps here (via goLAstreetcar)
It's a good question, considering the proposed Los Angeles Downtown Streetcar is (slowly) on its way to becoming a reality. A recent study has determined that opening month ridership for the public transit project will be between 6,610 and 8,390 riders daily, and those numbers have local leaders supporting the streetcar very encouraged.

This analysis means the Downtown L.A. Streetcar will outpace the opening month per mile ridership of METRO’s Orange Line, Gold Line, Green Line and Blue Line, and will double or triple current ridership on four of the five best performing existing LADOT Dash lines in Downtown L.A. It would also outperform actual opening month ridership of streetcar systems in Portland, Seattle and Tacoma, as well as those projected for other top cities planning modern streetcar systems, including Charlotte, Salt Lake City, Tucson and Atlanta.

Projected figures associated with the construction of the streetcar indicate an addition of 9,300 jobs and $125 million in private investment, and, once the line was running, an extra $24 million in added annual revenue from tourism and consumer spending.

The proposed Streetcar would be a 4-mile loop with service seven days a week for 18 hours a day. The L.A. City Council gave the project the go-ahead in April; Councilman Huizar has long-supported the project as part of his "Bringing Back Broadway" initiative.

Huizar is hosting a public forum entitled “The Future of Your Downtown” Wednesday, November 9, at 5:30 p.m. at the Orpheum Theatre. The Councilman will be joined by Dennis Allen with Los Angeles Streetcar, Inc. (LASI), Linda Dishman from the Los Angeles Conservancy, Robin Blair from Metro, Tom Rothmann from the L.A. Department of City Planning, Karin Liljegren, a leading adaptive reuse architect and historic code expert, Melani Smith of Melendrez Design Partners and other public and private sector panelists involved with leading Downtown’s revitalization efforts.