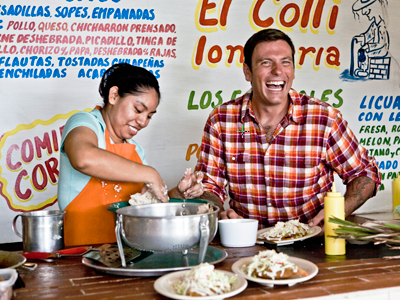 Chuck Hughes is back with a new series which premieres tonight at 7:30pm on the Cooking Channel: "Chuck's Week Off: Mexico"
The very entertaining chef Chuck Hughes of "Chuck's Day Off" is back with a new series, creatively titled, "Chuck's Week Off: Mexico," which premieres tonight at 7:30pm Pacific on the Cooking Channel. Chuck takes a break from running his two restaurants and heads to Mexico with each episode taking place in a different city or region of the country. If you've seen "Chuck's Day Off," you'll know that the energetic Hughes won't just be eating and drinking his way across the country, but he'll be getting into the kitchens to learn how to make the dishes he'll be enjoying. Cabo San Lucas, Loreto, and Mexico City are on the itinerary. Thankfully the show airs early on Tuesday nights so as not to compete in a somewhat crowded evening of top notch comedy and drama shows. Definitely check it out "Chuck's Week Off: Mexico."
—-
Speaking of a crowded night of TV, if you're not a "Sons of Anarchy" fan, you'll want to check out the new "Tosh.0" and "Workaholics" (see clip below) on Comedy Central. In late night fare "Chelsea Lately" has a good roundtable that includes Chris Franjola and Josh Wolf but as soon as the roundtable is done I'll be switching over to "Conan" to catch guest Julie Bowen, and most importantly, the incredible Maria Bamford performing! We have an interview with Maria that we'll be publishing here soon so stay tuned for that. "Late Night With Jimmy Fallon" has director Michael Moore, actor Josh Charles, and Chromeo performs, saw those guys at the Vancouver Olympics - they're great!
—-
The nominees are in and voting has begun on the People's Choice Awards, the true popularity contest (vs. critical analysis). I'm interested in seeing what happens in the late night category as there are so many strong candidates, but strangely, Chelsea Handler, who won the Entertainment Weekly poll, is not on the list of nominees.
—-
"Bored To Death" was fantastic last night - see the clip below with Sarah Silverman and definitely watch it as it is rerun on HBO this week. If you like spectacularly shot sweet comedy, you have to see this show, and let HBO know you like it, I'd love to see it continue.
—-
The TV Junkie Must-Watch Plan: "Chuck's Week Off: Mexico," "New Girl," "Raising Hope," "Sons of Anarchy," "Chelsea Lately," "Conan" (2nd half), "Late Night With Jimmy Fallon"

9:00pm New Girl Fox - Cece Crashes Cece tells Jess that Nick has feelings for her; Schmidt tries to hook up with Cece.

10:00pm Sons of Anarchy FX - Hands Jax and Tara get a look at life without SAMCRO but discover that their reality is hard to escape

10:00pm Tosh.0 Comedy Central - A web redemption for a guy who shoots himself.

10:00pm Parenthood NBC - In-Between When Amber offers to let Seth stay with her, she starts to realize what her mother dealt with; Adam tries to get physical with Kristina

11:00pm Chelsea Lately E! - On the panel are Chris Franjola and Josh Wolf.