Not a Dry Eye in the House: 'Next Fall' at Geffen Playhouse 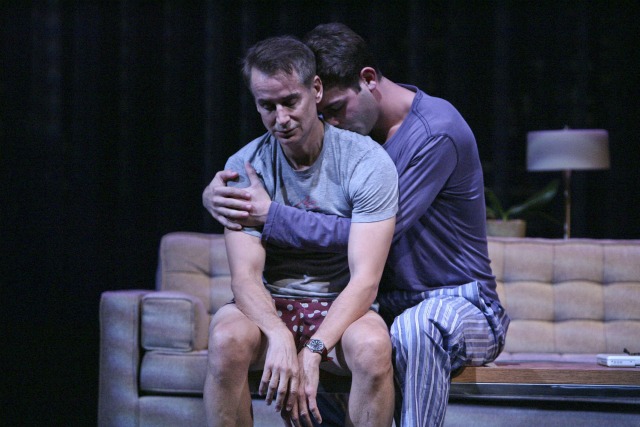 Geoffrey Nauffts and James Volk in 'Next Fall' (photo by Michael Lamont).

Geoffrey Nauffts' dramatic tear-jerker, Next Fall brings the emotional crux of the Gay Rights Movement to the Geffen Playhouse. Presenting homophobic family dynamics, tragic endings, and a realistic religious debate that tackles the incongruities and salves of faith, the play features charged performances, careful direction, and a bold script.

The Next Fall cast gives admirable, commanding performances. In addition to writing the play, Nauffs leads the cast as Adam, a sharp and anxious protagonist. His intimacy with the script is evident through an intuitive, natural rendering that envelopes the wired energy of New York. James Wolk is utterly endearing and full of warmth as Adams's partner Luke. His characterization effectively conveys subtle, yet undeniable internal conflict, brimming just under the surface of blind faith and fear. Jeff Fahey beautifully carries the most realistic and unlikable role of the play, that of Luke's homophobic father, Butch. Fahey pits dichotomies against each other — confusion and knowing; disgust and love; strength and worry — harnessing energy until his final explosive, heart-breaking scene.

Betsy Brandt, Ken Barnett, and Lesley Ann Warren portray characters that are somewhat shallow throughout the first act, but as the roles open emotionally during Act II, their true talents surface revealing different shades of compassion and understanding despite fragility.

Under the direction of Sheryl Kaller, Next Fall moves smoothly and coherently through time and place without distraction. Kaller ensures that realism is not sacrificed for the sake of telling a story well, and vice versa, creating a perfectly balanced staging. Set design by Wilson Chin thoughtfully reflects the duality of the play's theme as he transforms and reframes central objects.