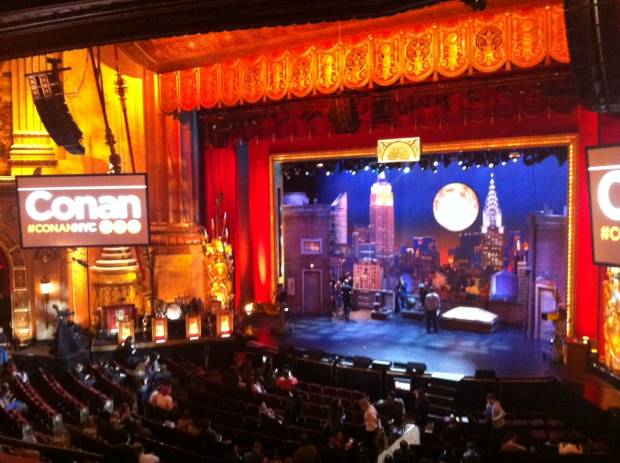 The #ConanNYC set of "Conan" at the Beacon Theatre in New York. A solid and entertaining reinterpretation for the week.

Last night I went to the taping of TBS' "Conan" at the Beacon Theatre in NYC. I hadn't been there since Comedy Central's "Night of Too Many Stars" autism benefit and it was impressive to see how the Team Coco crew had transformed the stage into a New Yorkified version of the new "Conan" show (see the above photo). In previous traveling iterations of Conan O'Brien's show he has always made sure to celebrate the location and this week in New York City has been no exception, with last night's episode, perhaps, as the most-locale-oriented of the week: the very-aged original cast of "Cats" shuffled their way through the theatre; we had a video of Conan attempting to play hoops in Greenwich Village and chess in Washington Square (and failing); we had a video of Conan visiting a real NY pizza joint and bringing along pathetic examples of SoCal pizza; Will Forte as a cranky Ted Turner astride his trusty buffalo (see below) had a video tour of NY as well as plenty of caustic comments both for New York and LA; we had comedian Eddie Pepitone, originally from Brooklyn but now ironically from Los Angeles, heckling Conan for his California lifestyle; and of course Conan's guests were New York-based actor Matthew Broderick and musician Paul Simon.

Our warm up consisted of comedian Jimmy Pardo (@NeverNotFunny) and several excellent musical numbers from the Basic Cable Band before bringing Conan O'Brien out to a standing ovation. "Conan" is shot in realtime with breaks equalling the commercial time during the show. The show went flawlessly, including all set changes as well as setting up Paul Simon's 9-piece band. What you didn't see was a post-show jam that Conan had with Paul Simon, a dream I'm sure he'd be wanting to make true for quite a while. I thoroughly recommend checking out tonight's final show from NYC which will include what I hope will be a prolonged visit with New York-based comedian Louis C.K. and I'm sure there will be plenty of surprises in store.
—-
Thank goodness NBC is back will new shows for it's Thursday comedy lineup tonight and we've got great episodes of both "It's Always Sunny In Philadelphia" and "The League" on FX.

Late night is very jammed tonight as "Conan" will be broadcast in conjunction with both "Chelsea Lately" who will have the fantastic and very nice Loni Love and Greg Fitzsimmons on the panel as well as Dave Attell's "Dave's Old Porn" on Showtime. Coincidentally Dave Attell will be on "The Tonight Show" and will doubtlessly be pushing the limits there and is hilariously juxtaposed with teeny-bopper faves Kristen Stewart and Joe Jonas. I wonder how that will go over?
—-
The TV Junkie Must-Watch Plan: "Community," "Parks and Recreation," "The Office," "Whitney," "It's Always Sunny In Philadelphia," "The League," "Conan," "Late Night With Jimmy Fallon"

8:00pm Community NBC - Advanced Gay Pierce's plan to throw a party to celebrate the success of Hawthorne Wipes is thwarted by his father; the Air Conditioning Repair Annex and the janitor vie for Troy.

8:30pm Rules of Engagement CBS - Audrey Is Dumb Jeff is delighted when Audrey can't speak after throat surgery; Russell instructs Timmy to fire someone in exchange for a raise.

8:30pm Parks and Recreation NBC - End of the World Pawnee residents contemplate their lives after a local group predicts the end of the world; Tom plans one last big party.

9:00pm The Office NBC - Doomsday Dwight installs a device in the office that will get everyone fired if they make too many errors.

9:30pm Whitney NBC - Two Broke-Up Guys When Mark's refusal to recycle a beer can causes a rift in his relationship with Alex, Whitney tries to rectify the situation.

10:00pm It's Always Sunny in Philadelphia FX - The Anti-Social Network The gang uses the Internet to cyber-stalk their prey; Frank tries to drum up business for Paddy's with a viral video. 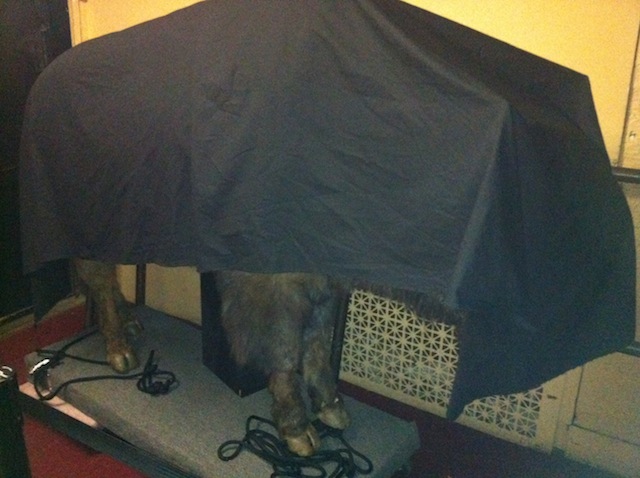 This is the buffalo that Will Forte rides as Ted Turner on "Conan" - it was featured in last night's #ConanNYC episode.