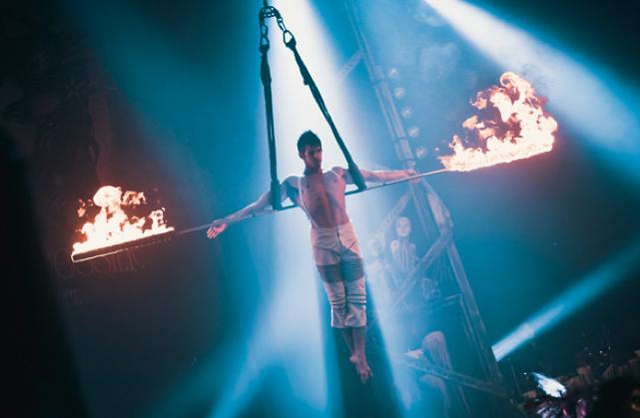 The Lucent Dossier Experience is unlike any other night of entertainment. It is very much theatre, but also part concert, acrobats, circus, dance performance, and opera. It’s a blend of all these things, but a truly unique experience. The music is hot, the costumes are elaborate, and the energy is electric. Imagine a lower budget Cirque de Soleil that retains the creativity but ups the freak factor. If Madonna tried to reinvent herself as a dubstep artist on an arena tour, this is the group she’d want on stage with her.

Before theatergoers even picked up their tickets, they were immersed in the exciting and twisted world of the Lucent Dossier Experience. On Oct. 21 and Oct. 22, performance troupe Lucent Dossier Experience packed the recently renovated Palace Theatre downtown to raise money for critically injured artist and “Burning Man icon” Brent ‘Shrine’ Spears.

The first half of the show, titled “SHOWACIDE,” told a dark but compelling story, while the second half was sexy, fiery, and featured daring acrobatics that made the audience simply say “wow.” Needless to say, it’s quite the trip for the imaginative among us. It became evident that the audience was won over when the entire theatre told The Man, “I’m weird too.”

Following the show, performers were auctioned off, with 100% of proceeds from ticket sales, the live auction, and silent auction going to help offset Spears’s medical expenses. If only they had auctioned off opening act Cello Joe, the stripping, beat boxing, looping, cellist that described one song as a dubstep spaceship crashing into an orchestra, I could have thrown my friend one hell of a bachelorette party.

With the winning recipe of a stimulating evening with talented performers for a great cause, I cannot wait to see where Lucent Dossier Experience pops up next.