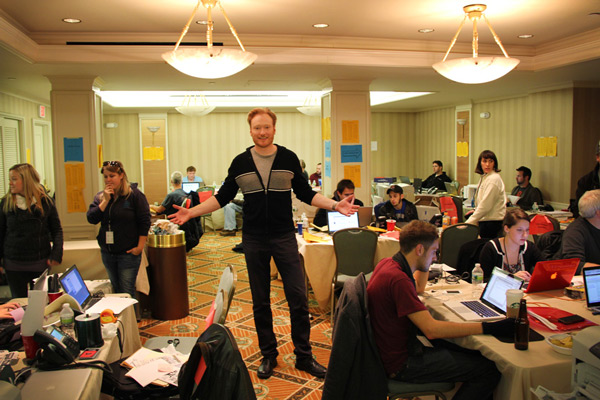 Late night TV will be kicked up a notch this week as Conan O'Brien does one of his famous road trips, this time to New York City, for a week. His Team Coco crew set up last week (see above) in an environment more appropriate for a "Conan in 2012" congressional campaign than for a TV show. He will hold court at the famous Beacon Theatre on Broadway with countless forays into the city as well as a myriad of New York-based guests, kicked off this week by friend, colleague, and late night competitor Jimmy Fallon. The amazing Reggie Watts will trek over from Brooklyn to make some amazing comedy-music, and to spice things up, Conan has flown out LA-based but Brooklyn-forever Eddie Pepitone to heckle him from the audience all week long.

My guess is that Fallon will be taping "Late Night With Jimmy Fallon" earlier in the day, where he will have as a guest, the incredible comedian Bill Burr, who I hope will share some stories of his recent whirlwind tour of Europe. I'm sure he will also be talking up his upcoming headlining show at Carnegie Hall on November 11th. If you've got friends within 100 miles of NYC, tell them to go to his historic show - it's sure to be the highlight of the New York Comedy Festival and it will be an event that people will be talking about for some time to come.
—-
A year ago today I posted my interview with Jon Bernthal who plays Shane on AMC's "The Walking Dead." The interview is worth revisiting as last night's episode sharply focused on Shane's character and some fateful decisions he made. Anybody else having a hard time getting back to sleep after watching "The Walking Dead"? The adrenaline rush is keeping me up a couple extra hours. What helped decompress me a bit was watching the wrap-up show "Talking Dead," hosted by @Nerdist Chris Hardwick, who is an obvious fan of the show and eager to introduce exclusive clips and talk to the show's producers and others involved in creating "The Walking Dead."
—-
Tonight you could start with a spooky/hilarious/bizarre episode of "Adventure Time" (highly recommended) and while there are plenty of Halloween marathons of films and TV shows ("American Horror Story" on FX to name one), The Innocents on TCM (@ 9:15pm) promises to be a good one, "Bored To Death" also has a Halloween angle and you might want to check out Nightmare On Elm Street's Robert Englund on "Hawaii Five-0" (9:55pm on CBS) or Dean Norris of "Breaking Bad" on ABC's "Castle" (also at 9:55pm). [If you want another taste of Bryan Cranston aka Walter White, IFC has a recent interview with him.]
—-
"Mad Men" Fans: What a depressing summer without a new episode, oh despair - but wait! You can check out an hour-long interview with creator Matthew Weiner that I've embedded at the end of this post.
—-
The TV Junkie Must-Watch Plan: "Adventure Time," "Bored To Death," "Enlightened," "Castle," "Conan," "Late Night With Jimmy Fallon"

8:00pm Terra Nova Fox - Bylaw Jim and Taylor investigate a murder in the colony; Skye helps Josh figure out how to bring his girlfriend from 2149 to the past. I pretty much put this here because this plot summary made me laugh so much, what a joke of a show.

8:30pm 2 Broke Girls CBS - And the Pretty Problem Caroline takes Max to a cake-decorating class to learn how to make more attractive cupcakes.

9:15pm The Innocents TCM - (1961) A Victorian governess (Deborah Kerr) fears a boy (Martin Stephens) and girl (Pamela Franklin) have been possessed by a dead couple.