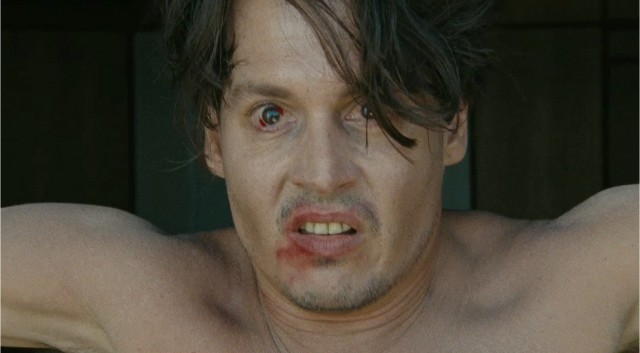 In the spirit of the season, release the Kraken, down some Zombies & get wasted with The Rum Diary! Johnny Depp reprises his Hunter S. Thompson for further misadventures in Puerto Rico. You've heard of Method Actors; writer-director Bruce Robinson (Withnail and I) may be the first Method Auteur. The former alcoholic tore through a bottle a day while writing the script, then promptly returned to AA once the film was in the can. Amber Heard (Pineapple Express) is the object of Depp's nonalcoholic affections, with Aaron Eckhart & Richard Jenkins (Six Feet Under) sharing shots.

From three sheets to the wind to nine lives, Antonio Banderas returns to his animated skin for Puss In Boots. The Shrek spin-off puts the suave swordsman cat on a quest to steal the Goose That Laid The Golden Egg. Shrek The Third director Chris Miller (who also voiced the Magic Mirror) returns to the reins, while Salma Hayek makes her first appearance in the series (surprising, considering her work with Banderas in the Mariachi trilogy). Zach Galifinakis gabs as Humpty Dumpty and Billy Bob Thonrton & Amy Sedaris speak for Jack & Jill, but perhaps the coolest cameo comes from Spanish horror wunderkind Guillermo del Toro.

In limited release, the Russian film Hipsters sports thick-rimmed glasses & snappy dressers, but has nothing else to do with our skinny-jeaned comrades. It's a musical, not mumblecore. It's earnest, not ironic. It's a colorful period piece, populated by swinging Soviet youths whose love of Western culture flies in the face of all Stalinist authorities hold dear. The film follows Stalinist Youth Mels (named for "Marx, Engels, Lenin & Stalin") as he becomes enamored with the enemy. As the film progresses, he finds himself dressing like a hipster, dancing like a hipster, dating a hipster & even dabbling in a black market saxophone for hipster clubs.

Like its teen protagonists, Hipsters is too busy having fun to bother with serious stakes. While adult characters warn about time spent in gulags & prison camps, the most danger any of the hipsters ever faces is a haircut. Like Hairspray & Pleasantville, the film touches on greater social issues, but is far too chaste to make any lasting statement about them. Which is quite all right; in these bleak times, we deserve something that's unabashedly upbeat. Were it not for some surprise nudity, it'd make a fine family film. The only strike against it: like that sprawling Soviet Union, there's far too much real estate. As jazzy and wonderful as each performance is, at over 2 hours there are simply too many.

Music remains the lifeblood in Oka! Blurring the line between narrative & non-fiction, the film traces ethnomusicologist Larry's obsession with the Yandombe forest of Central Africa & its resident Bayaka tribe. Larry is beloved by the tribe, but much has changed since his last trip. A nasty neighboring tribe, emboldened by a Chinese logging contract, has essentially imprisoned the Bayakas in village-wide poverty. They're buried beneath bureaucracy & barred from their ancestral hunting grounds. A renegade hunter & his wife are the lone upholders of the Bayaka's hunting-gathering tradition, unless Larry & the tribe can survive the forest and rejoin them.

Watching Oka! feels like being dropped into a documentary. Larry is based on real-life researcher Louis Sarno (who still lives with the Bayaka), the tribe plays themselves, the film was shot in a Central African forest reservation, and all sound - be it nature or tribal beats - was mixed from Sarno's recordings. Cinematography is lush, and tight shots lead to some incredible fly-on-the-wall observations of tribal rituals and African wildlife. Oka! has a pulse and rhythm all its own, but be warned that it's very deliberate. I confess that between the ooh's & ahh's, I was checking my watch. Recommended if you're glued to National Geographic.

Full list appears below. What will scare up your box office dollar this weekend?