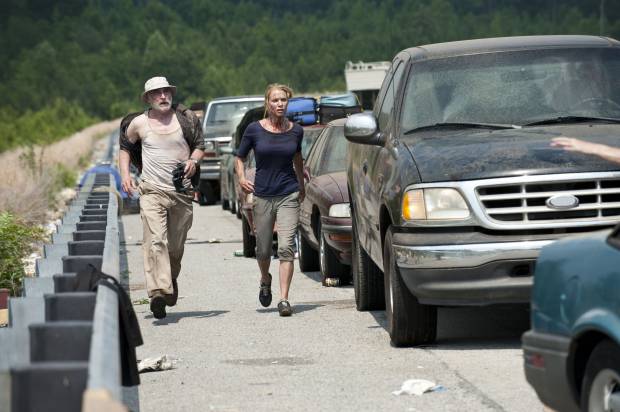 Are our survivors ever going to get off this damn highway? The series goes from one cliffhanger to another and last week was no exception — we're addicted.

I'm not a fan of FX buying Charlie Sheen's new show "Anger Management." While FX has brought over mainstream/broadcast TV stars in the past there is something galling about having the spokesman of lowest-common-denominator TV getting onto a network that has such outstanding programming. As someone who literally watches every FX show, there is now a show I won't be watching. It's not the end of FX being a great network and I definitely think they should get programming that makes them enough money to do all the quality shows but there's something unsavory about Sheen so hopefully this will amount to nothing more than a temporary mistake.
—-
Fans of HBO's "The Wire" will definitely want to check this out: PBS newscaster Judy Woodruff will be interviewing the cast of "The Wire" live this weekend for TED. Cast members in the panel are Michael K Williams (Omar Little), Sonja Sohn (Detective Kima Greggs), Jamie Hector (Marlo Stanfield), Gbenga Akinnagbe (Chris Partlow), as well as Donnie Andrews, who was the basis for Omar's character. This live session is tomorrow, Saturday, October 29th, and lucky for you it will be live-streamed HERE with "The Wire" segment beginning at around 2:15pm Pacific.
—-
Want more Halloween content? Check out FEARnet's "Psychoville Halloween Special" which will air/be available on Sunday, October 30th. On Saturday we've got a Boris Karloff marathon on TCM — don't forget the classics!
—-
For your listening pleasure consider downloading the most recent Long Shot Podcast which features Paul Provenza, creator/host of the best comedy insider TV show on the air, "The Green Room With Paul Provenza" (Showtime).
—-
OK, so maybe you don't want even more Halloween content, how about a stage show based on a TV show? "I Love Lucy" Live On Stage is being held now through the end of the year at the Greenway Court Theatre. "I Love Lucy" has been honored this year at the Paley Center for Media and is seeing a resurgence in interest and now you have the chance to see a couple episodes of the classic series being performed live, just the way they were done over 55 years ago. This adaptation of the show, starring Sirena Irwin as Lucy, premiered in LA in September and has now been extended through the end of the year due to rave reviews.
—-
The TV Junkie Must-Watch Plan: Tonight "Real Time With Bill Maher," "The Soup," "Fashion Police," "Late Show With David Letterman," "The Late Late Show With Craig Ferguson." Saturday - The Body Snatcher, Isle of the Dead. Sunday - "America in Primetime," "The Walking Dead," "Homeland," "Boardwalk Empire" (on late rerun), "Dexter" (on late rerun), "Hung" (on late rerun).

8:00pm Chuck NBC - Season Premiere. Chuck Versus the Zoom Carmichael Industries takes on a thief and a conniving investor; Morgan helps Chuck put together a surprise for Sarah

8:15pm The Other TCM - (1972) Based on Thomas Tryon's novel about twin brothers whose macabre game of life and death extends beyond the grave.

8:30pm SoCal Connected KCET - Ambassador of Jazz: Herbie Hancock SoCal Connected takes you on a journey from the origins of Hancock’s career as a musical prodigy when he played with legendary trumpeter Miles Davis, to his time recording hit songs for commercials and TV, to the present as he spearheads the LA Philharmonic & Hollywood Bowl jazz programs

9:00pm Grimm NBC - Series Premiere. Detective Nick Burkhardt discovers he is part of a line of profilers charged with keeping the balance between humanity and mythological creatures

9:55pm Boss Starz - Reflex Kane and his crew flex their political muscles; Meredith suspects Tom is keeping something from her.

8:00pm Corwin KCET - The career of Norman Corwin, writer, director and producer during the golden age of radio.

10:00pm The Stash Playboy - Laughs abound on the Internet.

7:30pm A Funny Thing Happened on the Way to the Forum TCM - (1966) A con-man slave (Zero Mostel) and his sidekick (Jack Gilford) fake a courtesan's funeral to fool a pimp (Phil Silvers) in ancient Rome.

8:00pm The Simpsons Fox - Treehouse of Horrors XXII A boulder traps Homer's arm when he takes a drive through a canyon; a spider bite paralyzes Homer; Flanders becomes a vigilante by night; Bart and Milhouse travel to a distant planet to obtain an extract.

8:00pm Once Upon a Time ABC - The Thing You Love Most Regina tries to push Emma out of Storybrooke and Henry's life; information about the Evil Queen's curse comes out.

8:30pm Allen Gregory Fox - Series Premiere. When pretentious 7-year-old Allen Gregory begins the first grade in a public school, he struggles to fit in with his peers; Allen has in interesting first meeting with his principal.

9:00pm The Walking Dead AMC - Save the Last One The group awaits Shane's return; Shane finds himself trapped in a school; Daryl and Andrea search for someone in the woods.

9:00pm How Evil Are You? Discovery - Film director Eli Roth conducts a series of experiments into what causes people to perform evil acts.

10:00pm Pan Am ABC - The Genuine Article Despite being close to losing her job, Maggie manages to make it onto a flight to Rio de Janeiro; Kate is unsure of herself after getting a difficult mission involving a Yugoslav diplomat; Ginny's games don't sit well with Dean.

10:00pm Homeland Showtime - Blind Spot Brody confronts his surviving jailor; the agency is on the trail of Aileen and Faisel.

10:30pm How to Make It in America HBO - Mofongo Ben and Cam charm two young buyers; Rene tries to make amends with Debbie; Rachel turns her life around in a single day.