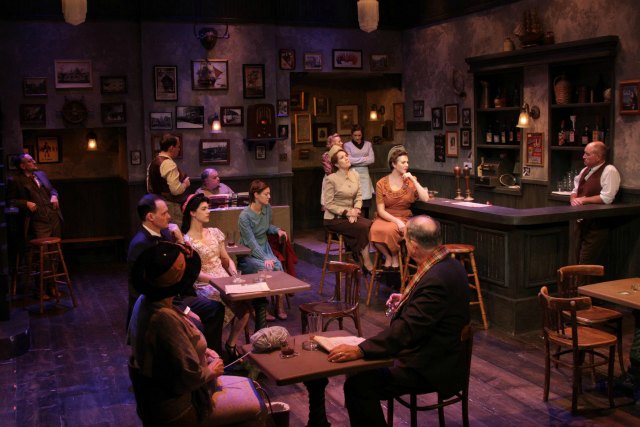 The "Epps Cocoa" cast of the Antaeus Company's production of "Peace In Our Time." Photo courtesy of Geoffrey Wade

There's such a surfeit of talent in the Antaeus Company that whatever they do is generally worth attending simply because they're doing it, but it helps that the company usually picks intriguing plays to produce. The current production is a drama, Peace in Our Time, written by Noël Coward, someone primarily known for sparkling comedies. It's a speculative piece about how things might have been if Britain had been occupied by Germany during WWII, and under Casey Stangl's expert direction it offers the outstanding ensemble (double-cast as usual with Antaeus — I saw the "Epps Cocoa" cast) many chances to shine in this compelling show.

In 1940 wartime London, regulars still gather at the Shy Gazelle pub, each dealing with the dilemma of the German occupation in their own way. Pub owners Fred (Steve Hofvendahl) and Nora Shattock (Lily Knight) don't like the situation, but they're mainly just trying to keep their business running. Their son was reported killed early on in the war, so they worry about their daughter Doris (Danielle K. Jones) and her resistance efforts. Mr. and Mrs Grainger (John Combs and Amelia White) wait quietly for news of their P.O.W. son, while journalist Janet Braid (Emily Chase) eagerly listens to illegal resistance news broadcasts. Chorley Bannister (J. D. Cullum) cozies up to the local Gestapo as Dr. Venning (Peter Larney) covertly treats British soldiers in hiding. As years go by, the pub becomes a center for the British resistance, but their courage doesn't come without a cost.

Hofvendahl is enormously endearing as the dependable Fred, raucously performing "Don't Let's Be Beastly to the Germans" or coldly condemnatory while evicting a local girl dating German officers from his establishment, but always excellent. Knight is a believable and sympathetic nervous wreck as Nora, worrying about her children, and Jones exudes the seeming invulnerability of youth as the brave Doris. Combs and White provide a picture of parental steadfastness, and Combs' unexpectedly lively version of "London is a Little Bit of All Right" is a treat.

Cullum is delectably despicable as Chorley, getting the maximum value out of Coward's witty dialogue, and Chase makes an excellent foil for him, her blistering speech at play's end a thing of vicious beauty. Larney so takes charge of the scene in which he treats a wounded soldier that it really feels like a professional resistance fighter has finally arrived. Kendra Chell is notably good as Alma, who wants to boot the Germans out of her country, and Susan Boyd Joyce is amusing as her irrepressibly cheerful mother. Raleigh Holmes, as nightclub chanteuse Lyia, sings several of Coward's songs splendidly, but her rendition of "Most Every Day" is particularly lovely.

Stangl's achievement is impressive on many levels, from wrangling 46 actors in two casts to pacing that floats the show along just so, but mainly it's the care taken that every character is made distinct that helps make this theatrical world thrive. Coward's play is very much a big picture piece, but he does enough detail with each role that both the macrocosm and microcosm are admirably served. Barry Creyton's adaptation, which replaced 40 minutes of obscure 1940s politics with nine lesser-known Coward songs, seems quite effective to judge by the results. Tom Buderwitz's pub set is glorious with period detail, and John Apicella's video projections are succinctly and effectively constructed, bringing a sharp blast of reality to the proceedings.

Peace In Our Time plays through Dec. 11, 2011 at Deaf West Theatre. Tickets are available online.