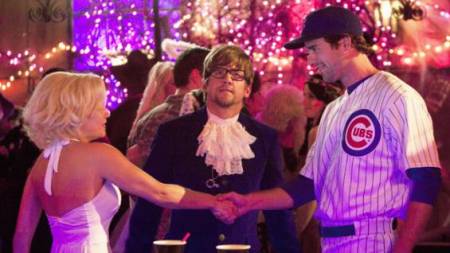 "Happy Endings" (ABC @ 9:30pm) gets Halloween-y tonight
Tonight you can enjoy a hilarious Halloween-themed episode of "Happy Endings" (ABC @ 9:30pm) immediately followed by a horrific Halloween-themed episode of "American Horror Story" (FX @ 10pm). God Bless America.
—-
I was very sad to hear about comedian Patrice O'Neal's stroke this morning via the Opie and Anthony Show. We just saw him a month ago on "The Comedy Central Roast of Charlie Sheen" and I was fortunate enough to see him perform live in NY recently. O'Neal is a genre-defying genius, I wish I knew more about how he was doing, I hope he has a quick recovery, in the meantime I suggest you check out O'Neal's excellent HBO special, Elephant In The Room, which was released earlier this year
—-
Here's a disease you can do something about and have a laugh at the same time: the International Myeloma Foundation's 5th Annual Comedy Celebration on November 5th will feature performances by Ray Romano (who will host the event), Tom Arnold, Darrell Hammond, Dom Irrera, Colin Quinn, Doris Roberts, Garry Shandling, and Fred Willard. The show is at The Wilshire Ebell Theatre & Club, 743 South Lucerne Blvd. - a great place to catch this amazing lineup. My uncle died of multiple myeloma so seeing these people donate their time and talent is very touching for me.
—-
It was great to see that Showtime has renewed "Homeland" for another season! Sure, we knew that Claire Danes, Damian Lewis, and Mandy Patinkin were going to be good in this show, but it's provided a venue for Morena Baccarin to shine.
—-
It was remiss of me not to mention "Bomb Patrol," a great new show on G4 that's on Tuesdays at 10pm. The show highlights bomb-disposal teams and the technology they use to defuse and move IEDs and other ordinance in Afghanistan. There's The Hurt Locker and then there's the real thing which is no less dramatic or terrifying.
—-
Jay Leno again proves he's a jerk: Not only was Leno a stuffed-shirt on last night's "Tonight Show" with President Obama as a guest, over the weekend, as ride marshall, he exhorted motorcyclists in The Love Ride to "Don't drive safe. I wanna see somebody go down. So it'll be fun. I want it to be in front or behind me and see a whole row of bikes go down. ... Get drunk, fall off the road." Less than an hour later 2 motorcyclists in the ride were killed when they struck a big rig. Hey Jay, this shit isn't funny - it also wasn't funny a couple years ago when you "joked" that people should run down cyclists in Los Angeles. You're a creep.
—-
Bette Midler is offering toilets to Occupy Wall Street via "The Joy Behar Show" on CNN - see clip at the end of this post. Way to go Bette!
—-
The TV Junkie Must-Watch Plan: "Suburgatory," "Happy Endings," "American Horror Story," "Chelsea Lately," "Conan" (2nd half), "Late Night With Jimmy Fallon"

9:00pm MythBusters Discovery - Flying Guillotine Taking on the military myth that it's safe to use the explosive C4 as a cooking fuel as long as you don't drop anything on it;

9:30pm Happy Endings ABC - Spooky Endings While Brad and Jane are house-sitting in the suburbs, the rest of the gang attends a warehouse party.

10:00pm American Horror Story FX - Halloween, Part 1 The line between the living and the dead blurs; the house's old residents give the Harmons decorating advice.

10:00pm Psych USA - This Episode Sucks Shawn and Gus are convinced Lassiter's girlfriend is a murderer.

10:00pm Penn & Teller Tell a Lie Discovery - Hair Bleach Is a Rocket Fuel Claims include that a butter knife can stop a bullet and that man can fly using bleach for fuel.