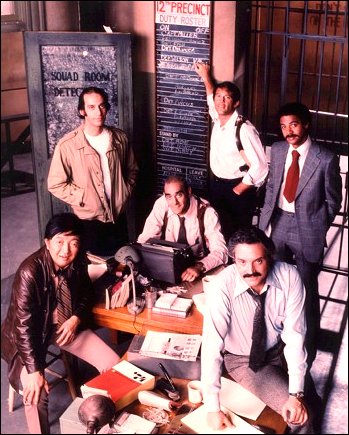 "Barney Miller: The Complete Series" came out today on DVD, a show that harkens to a time when good writing and acting was what made TV important - not celebrity or big budgets.

It seems like anything can happen on tonight's "Son of Anarchy" but what we know is supposed to happen before the episode airs is a statement from showrunner Kurt Sutter about DirecTV's threat to suspend content from Fox and FX networks starting on November 1st. Sutter has been vocal about the situation on his Twitter account, no surprise there, but the video spot will include an action plan for #SOA fans to follow in protest of the threat from DirecTV. Last year Fox and FX shows suffered a loss of viewers due to the networks' fight with Cablevision and Sutter doesn't want a repeat of that.
—-
Today marks the release of ABC's "Barney Miller The Complete Series," all 8 seasons, all 168 episodes, plus the first season of the spin-off show "Fish" starring Abe Vigoda. This is a classic TV comedy that was on the air from 1975 to 1982. With very few exceptions, the events of every episode transpire on a very simple set of the offices of NYPD precinct 12 in Greenwich Village and in later seasons the events occur during one working day. The show won Emmys, Golden Globes, and a Peabody Award among others. Hal Linden led the cast of 10 primary characters, detectives and police officers, with a rotating cast of various criminals and complainants.

Somehow on this ratty set with a cookie-cutter premise, TV history was made. Going up against hardboiled or action-oriented series like "S.W.A.T.," "CHiPs," "Kojak," "Baretta," etc. it's "Barney Miller" that has remained a favorite among actual policemen for its realistic and humorous portrayal of their lives: endless paperwork, crappy coffee, and an endless stream of repeat offenders. Most detectives go through their careers without discharging their weapons and solve their cases by making phone calls and filing reports and the squad at Precinct 12 do that but by voicing a philosophy that gets them and their real-life counterparts through the tedium.

As a kid growing up in the SF Bay Area I enjoyed watching "Barney Miller" in syndication on KTVU so it was a real treat to crack into the first of the 25 DVDs in this amazing box set although I did look at the some of the extras, particularly the interviews with Hal Linden and Abe Vigoda who provide a lot of insight into what it was like to work on this show. Any fan of classic TV will love the opportunity to check out this complete set, even though the show is in syndication you can begin at the beginning, including checking out the original pilot for the show, which I had never seen before. I'm not sure if/when the episodes will be viewable on demand via Amazon or other services but it seems like that would be a more expensive way to go.
—-
TV Round-Up: Was pleased to see that Comedy Central has renewed "Workaholics" for another season - they've got a great new episode tonight at 10:30pm. Check out our interview with show co-creator Anders Holm. | It only took a couple episodes but AMC has renewed "The Walking Dead" for at 3rd season, an event I was dead certain would occur. | Showtime's "Shameless" will return on Jauary 8th but in the meantime you can put some input on a web series featuring Lip Gallagher (Jeremy Allen White) by posting your ideas about what Lip should do on the show's Facebook page. | Next week we're going to see "Conan" in NYC _and_ the gallery of Conan fan art - Conan and Andy Richter have kindly provided this tour of the artwork.
—-
There's a great Funny or Die Occupy Wall Street spoof clip at the end of this post: Occupy Main Street.
—-
Late night is complicated tonight: There's a great panel on "Chelsea Lately" with Josh Wolf, Natasha Leggero and Joe Matarese; meanwhile "Conan" has Zach Galifianakis and Aaron Paul ("Breaking Bad"); and then Leno's gotta stick his nose in there with President Obama on "The Tonight Show."
—-
The TV Junkie Must-Watch Plan: We Can't Go Home Again, "Sons of Anarchy," "Chelsea Lately," "Conan" (2nd half), "The Tonight Show With Jay Leno," "Late Night With Jimmy Fallon"

9:00pm Mysteries at the Museum Travel - French Connection; Shipwrecked Gold; Area 51 Plane Crash Don looks at how a drug syndicate was brought down; a gold ingot from a sunken ship

10:00pm Sons of Anarchy FX - Family Recipe A club vote gets side tracked when SAMCRO is forced to deal with dangerous external threats.

10:00pm Chopped Food - Make a Splash! Sea urchin and cranberry juice in the first basket; canned fruit and pork hock in the entree round; gingerbread dough.

10:00pm Off Limits Travel - Hawaii Hawaii has a dark side with an underground world, waterway remains and bloody rituals.