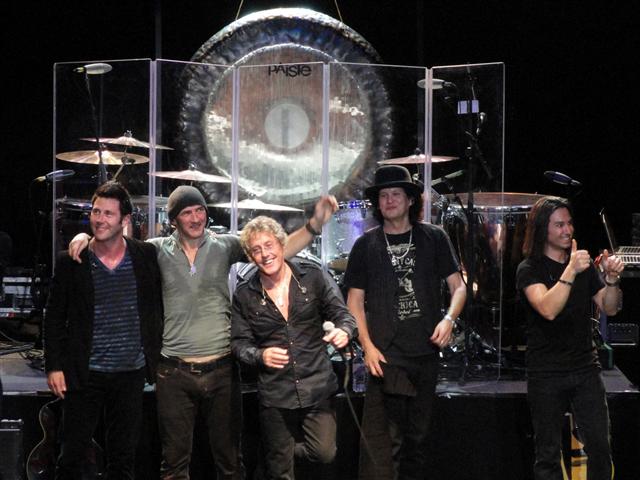 Roger Daltrey and band in London, March 2007. Photo by Phil Guest via flickr.

Tommy has been adapted countless times since its 1969 debut as a double album by The Who. If we only count renditions that have had the direct involvement of creator Pete Townshend, there’s been a symphonic version for 100-piece orchestra, a star-studded gala featuring The Who and special rock star guests, a bonkers Ken Russell fantasy film and a Tony Award-winning bit of musical theater. But none of these incarnations have ever been as completely satisfying as the original album. While it’s probably the most authentically opera-like of all rock operas, in terms of adherence to tradition, it seems to resist visual representation or interpretation by outsiders.

So it was gratifying when Who vocalist Roger Daltrey announced that his own Tommy tour would follow the album as faithfully as possible. At the Nokia Theatre on Wednesday, Daltrey and his band of young American players, along with Pete’s brother Simon Townshend on guitar, gave the work life as a raw, bloody piece of rock and roll once again.

Tommy is one of those divisive works among Who fans, some feeling it’s the point where everything started to go wrong for the sixties’ greatest singles band, others finding inspiration in its ability to extend the medium and deliver an hour-long piece of work that still delivers the visceral thrill of a great single but for a really long time - Tantric Rock. Townshend first put this idea to use in 1966’s "A Quick One While He’s Away", a nine-minute song that flies by thanks to its construction of miniature singles, each one compelling on its own and none going on too long. Tommy simply takes this idea and blows it up; as convoluted as it can get for anyone trying to follow the story, each of its sections is a straightforward, three-minute song.

Daltrey and his band kept their promise on Wednesday, playing the album straight through (with the exception of the instrumental variation “Underture”, which was not missed) in the understated manner of The Who’s studio recording. There was no attempt to match the raging power that Tommy took on when The Who first toured it, where they transformed ditties like the delicate, elaborately harmonized “Christmas” into a proto-punk assault on the senses.

Instead, we got to hear these songs with their prominent organ licks and spacious, subtle arrangements intact. The degree of accuracy was sometimes shocking; Simon Townshend and guitarist/ bandleader Frank Simes played the acoustic interlude between “Overture” and “It’s a Boy” with such spot-on precision it was hard to believe someone hadn’t just put a copy of the LP on for a minute. But such an approach makes sense, as The Who’s original recording still serves as the most ideal reference point, and he’s found a crew of players capable of pulling it off.

Daltrey himself was in great form, the best L.A. has seen him in seven years. The singer was plagued by voice problems a short time ago, his ailing pipes forcing cancellation of multiple shows on The Who’s Endless Wire tour and prompting anxiety among fans regarding the band’s future. Prior to that, he’d been almost boring in his reliability, one of those guys that never had a bad night even after screaming his guts out over the loudest band in history for 40 years. Throat surgery last year seems to have done him a world of good. Even at the end of a long tour, he can hit 90% of his old range with power, and he’s learned how to cheat that remaining 10% by subtly altering the melody line or pronunciation of the lyrics. When he’s in his comfort zone, he’s still got incredible strength, besides being one of the few rockers now pushing 70 that still looks cool with a bare chest.

In contrast to Roger Waters’ fully multi-media Wall production last year, Tommy was played with a complete lack of visual accompaniment apart from some primitive animated videos which really would have been better turned off. (The Who evidently don’t really do narrative video very well, the ones they used for the Quadrophenia tour in 1996 were equally useless.) No special guest singers or costumes, Daltrey sang all of the characters except for those voiced by Pete Townshend, which were sung almost identically by Simon.

While some of these songs have been part of The Who’s core set list ever since its release, hearing the whole thing performed in sequence produced an unexpectedly strong emotional impact. While some of the aspects of the plot are surreal, at its heart is a story about overcoming betrayal, real classic opera grist. You can hear it in his parents’ anguished “Tommy can you hear me?!”, as they have a what-have-we-done revelation at Christmas dinner, imagining they’ve sent their son to hell. You can really hear it in John Entwistle’s tales of Cousin Kevin and Uncle Ernie, rattling off lists of the nasty things they have in mind for the helpless child. The Who never did “Cousin Kevin” when they toured the work, perhaps thinking it was too much of a downer, or maybe it just wasn’t working as a live number. But looking around the Nokia, about every tenth person had their eyes closed as they sang along with some of the most chilling pop lyrics ever written; “Maybe a cigarette burn on your arm/ would change your expression to one of alarm.” It was a fittingly dark moment, and we think Entwistle would have been pleased.

Tommy’s moment of triumph after he regains his senses and becomes a guru figure gets a much fuller airing in this version, incorporating “Sensation”, “Welcome” and “Sally Simpson” which were often left out in The Who’s stage show. In 1969, Tommy went from “Smash The Mirror” to “I’m Free” to “Tommy’s Holiday Camp” in less than four minutes, which is not a long time, considering this is the only time in Tommy’s life where things seem to be going OK. Subtly, the inclusion of these lighter songs in Daltrey’s version changes the mood enough that when Tommy is finally betrayed again at the grand finale, it has a greater tragic impact, like a happy ending has been subverted.

Following this, Daltrey and his band played on for over an hour, covering early singles like “Pictures of Lily” and “I Can See For Miles” that The Who haven’t touched on stage in a dog’s age (which reminds me, Rog, how about “Dogs” next time?) along with solo hit “Without Your Love” and a handful of well-chosen covers. The inevitable “Behind Blue Eyes” was re-imagined with the defiant ending muted, now more vulnerable than aggressive, an interesting choice for a singer synonymous with rock machismo. While his voice had roughened a bit by the time they closed with the lovely Townshend obscurity “Blue, Red and Grey,” he was on pitch and sounding like he meant it.

It remains to be seen whether Townshend’s health and hearing issues will ever withstand the rigors of another Who tour. But as long as he has the ability to write, it’s too soon to close on them completely. That Daltrey is keeping himself healthy and in shape for the duty, if it ever calls, is an encouraging sign and a reminder to the fans that there’s still someone who wants new music from The Who even more than them.