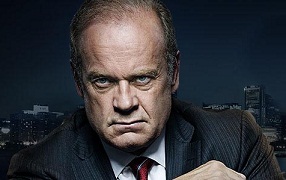 Tonight Starz will premiere another original series at 8pm (with other repeats during the night). "Boss" stars Kelsey Grammer as Chicago Mayor Tom Kane operating in a cynically corrupt political system. More "The Wire" than "West Wing" the series looks very interesting and provdes Grammer a role to bust himself out of being typecast as a stuffy and wimpy buffoon. Is it enough for people to plunk down more cash for another premium channel? I don't know. I did enjoy the limited screener and content Starz sent me but I wish my cable provider offered a reasonable package that included Starz - a situation that might be the largest hurdle Starz must face.
—-
We've seen it happen with Time-Warner and now it's DirecTV's turn to have a major dispute with Fox that might result in Fox/FX programming being removed from the satellite service as of November 1st. It again appears that Fox is demanding a premium for their shows to remain on a distribution channel. Who will blink this time?
—-
Funny or Die has a very funny video of Kiernan Shipka, who plays Don Draper's daughter in AMC's "Mad Men," as a child-child psychologist who treats the child stars of other series like "Modern Family," "Toddlers & Tiaras," etc.
—-
Here's our Channel Zero podcast with comedian Marc Maron, creator of WTFpod and countless excellent jokes and bits on stage. This is the audio file for the interview we posted on LAist at the beginning of the summer.


Thank you for listening, please subscribe on iTunes and please rate! In addition to @LAist, for TV tidbits please follow me on Twitter at @TheTVJunkie
—-
Last night's "Conan" was great and I've included the full show episode at the end of this post with Jesse Tyler Ferguson of "Modern Family" at 19:00 minutes in, and comedian Amy Schumer at 36:00 - Schumer had a great set at Comedy Central's roast of Charlie Sheen and does some more good work here. I also included a video of the behind-the-scenes action of creating the "Conan" NYC promo with Eddie Pepitone.
—-
The TV Junkie Must-Watch Plan: Tonight - "Real Time With Bill Maher," "The Soup," "Fashion Police," "The Late Late Show With Craig Ferguson." Saturday - Go have fun with your friends. Sunday - "Boardwalk Empire," "Homeland," "The Walking Dead" (on rerun), "Dexter" (on rerun), "Hung" (on rerun)

8:30pm SoCal Connected KCET - This special report uncovers how the prescription pill epidemic especially affects teens as new data shows that nearly half of teenagers polled by the Department of Justice think prescription drugs are safer than street drugs, and a third believe they aren’t addictive at all.

10:00pm Boss Starz - Series Premiere. Listen Mayor Tom Kane finds out he has a serious medical condition and tries to focus on the upcoming gubernatorial primary.

8:00pm Once Upon a Time ABC - Series Premiere. Emma's life turns upside down when she is visited by Henry, the 10-year-old child she long ago gave up for adoption;

9:00pm Dexter Showtime - A Horse of a Different Color

10:00pm Homeland Showtime - Semper I Brody's erratic behavior threatens his status with the media; Carrie is desperate for evidence against Brody.

10:00pm Pan Am ABC - One Coin in a Fountain Kate discovers the man she and Maggie have been competing for is involved in her next mission

10:30pm How to Make It in America HBO - It's Not Even Like That Ben and Rachel's friendship is tested; Cam lands a great location for a CRISP photo shoot; Rene collects on a debt.