Occupy LAUSD: What Does 'The Man' Have to Do With L.A.'s Educational Woes? 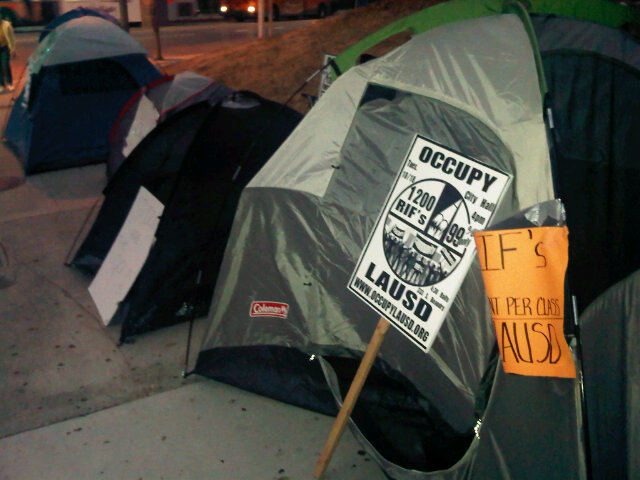 Occupy LAUSD tents on Day 3 (Photo by @JoseDelBarrio via yfrog)

Since Tuesday, Santee teacher Jose Lara has been sitting—no standing—at the corner of 4th and Beaudry at LAUSD Headquarters. Occupy Wall Street has beget Occupy L.A. has beget Occupy LAUSD. The movement states "This is a call out to the 99% in the Los Angeles Unified School District. It is time we Reclaim Our Schools from the 1% wealthy."

But what does "the man" have to do with huge class sizes, dirty classrooms, empty libraries, fallow gardens and laid off teachers? Haven't the schools been the victim of state budget cuts? According to Lara and education activist Robert Skeels the beleaguered school district is running a current $50 million surplus and not rehiring RIF'd (a polite term given by corporations for firing without giving cause) teachers, staff and librarians? Why? Why conflate the 1% of the country with a battered school district? Perhaps having billionaire corporations and types like Eli Broad, Bill Gates, Philip Anschultz, and NewsCorp, and Goldman Sachs directly fund the mayor's Coalition for School Reform translates into policies that benefit that same 1%? Could it be? 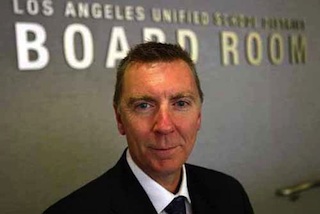 "I think Occupy LAUSD is misinformed. I think it’s certainly contrary to the spirit of what’s been taking place in this country and other countries, in terms of Occupy Wall Street. It was and is a very laudable movement for economic justice. Where we’ve watched policies systematically hurt the poor and middle class, to equate that with LAUSD is beyond flawed."

This stands in stark contrast to comments made by L.A. labor leader and AFL-CIO Exec. Secretrary and Treasurer, Maria Elena Durazo:

"The Los Angeles labor movement stands with the hard-working and dedicated teachers who are occupying LAUSD. These teachers are on the front lines fighting for lower class sizes, broad based curriculum including the arts, and quality public schools for our kids. We will continue to support Occupy LAUSD until LAUSD has hired back the 969 teachers, librarians and nurses who were cut."

The endorsement from the head of LA’s 300 unions plus the overwhelming vote from the United Teacher Los Angeles teacher’s union itself means that Occupy LAUSD has some big support.

We asked Occupy LAUSD participant Lara about that and for his thoughts on former Gates Foundation senior staffer Deasy.

LAist: What do you think of Dr. John Deasy"s recent statement?
Jose Lara: It is hard for him to understand what the 99% movement is really about because he represents the worst of the 1%.

What does privatization mean for a classroom teacher?
Privatization means over-emphasis on mandated standardized testing that only serves to narrow the curriculum, de-fund the arts, and disengage students. It means more focus on test scores than truly educating our children. It also [means a] more mandated curriculum, a loss of academic freedom and increased spending outside testing companies and consultants.

It also provides the pretext to give away our public schools to private corporate charters with unelected boards, funded by billionaires who have no experience in education, no research-based evidence of success, and no track record of educating an equal percentage of special needs children.

For our school communities this means more disruption by Corporate Charter School take over like they have done at Clay Middle School, or possibly being given away to an outside operator like Mayor Villaraigosa’s Partnership for LA Schools did to Jordan High School.

Aren't charters considered innovators?
As education historian Diane Ravitch points out in her book, The Death and Life of the great American School System, teacher’s unions originally started Charter schools to experiment with school innovations that could then be applied to the public school system. However, that has all changed now.

Charter Schools are now the way for corporate management companies to get their hands on public funding and make a profit off of teaching our children. Many charter schools are run by CEOs and are very selective as to who they allow in their schools.

A court appointed Office of the Independent Monitor for the Modified Consent Decree for LAUSD stated that children with disabilities are "significantly underrepresented" at corporate charter schools. Hence, corporate charters use government funds, while discriminating with regard to whom they will educate.

You're a classroom teacher. What subject do you teach? What have been the effects of the cuts on your students these last few years?
I am a History Teacher and have seen a dramatic increase in the number of students per classroom. Our school has been stripped of many our elective classes such as dance and music. At a time when our students and families need more services we have cut the number of school social workers, counselors, special aide assistants we have at our school. Many of us educators routinely pay for our own classroom supplies. Many passionate teachers are now gone due to massive layoffs year have deprived our students of a great education. Our schools are currently running at 91% of full staffing levels.

LAUSD could easily fund more teachers, more counselors, and more classroom resources - including books and basic necessities if it would re-prioritize its budget and end unnecessary testing programs and stop giving away our schools to corporate charter companies.

For educators the focus has moved away from project-based learning; thematic and interdisciplinary teaching; culturally relevant literature, real-world problem-solving and teaching the whole child to a narrow focus on testing.

The energy and time LAUSD School Board members and our Superintendent have spent on promotion of standardized testing, ultimately-abandoned prescriptive programs, and corporate charter-school give-aways could be better spent on fully funding our public schools.

You can can head to the corner of 4th and Beaudry in downtown LA any night of the week now to meet Lara and ask him more about the Occupy LAUSD movement. Currently we are awaiting reply from Deasy's press team. You can follow @OccupyLAUSD and Lara (@JoseDelBarrio) on Twitter for updates.