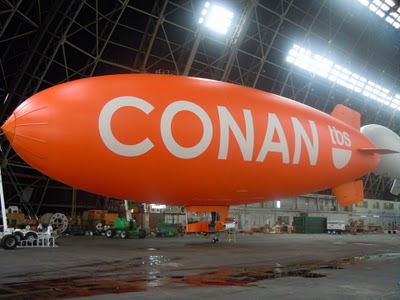 You saw a lot of the "Conan" blimp during the MLB playoffs and we wonder if it will make it's way to NYC for Conan's weeklong stint in town.
As covered in this column last week, Conan O'Brien is going to do a week of shows in New York City during the first week of November, a visit which will now include unveiling a gallery of fan art at the Time Warner Center with more than 50 creations. Conan's most recent promo for the trip is at the end of this post and I anticipate that he will present us with a very active week in the city - he's not going to NYC to just show us the inside of the Beacon Theatre. I'll be going to the art show and one of Conan's shows and will give you a full report.
—-
Podcast Roundup: Tonight you can go see TV star and evangelist for intelligence, Greg Proops' live Proopcast, "The Smartest Man In The World," for free at Bar Lubitsch in WeHo starting at 7pm. | Are you missing "Man Men"? Was the season finale of "Breaking Bad" not enough for you? Marc Marcon did separate WTFpod sessions with both Jon Hamm and Bryan Cranston FTW. | Comedian Joe Matarese's "Fixing Joe" has our friend Jim Gaffigan in for an episode and it's fantastic. | Over at @nerdist - the "Making It" podcast has Reggie Watts as a guest and it's a must-listen. | Speaking of @nerdist, Chris Hardwick guests on "FitzDog Radio" and it's hilarious. | Ken Marino of "Party Down" and "Childrens' Hospital" is on Paul Scheer's "How Did This Get Made?" to talk about Lindsay Lohan's masterpiece, I Know Who Killed Me.
—-
The People's Choice Awards nominations begin today - get your votes in.
—-
It's mystifying but somehow "Terra Nova" grew 14% in viewership Monday. Who the heck is watching this show? I had no idea there were so many 14 year old boys in this country.
—-
The TV Junkie Must-Watch Plan: "Frontline," "Sons of Anarchy," "Conan," "The Late Late Show With Craig Ferguson"

10:00pm Sons of Anarchy FX - Fruit for the Crows SAMCRO deals with the fallout from a death threat on Tara.