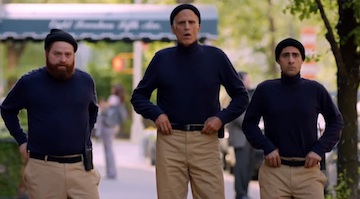 HBO's "Bored To Death" is back tonight with another artfully hilarious half-hour of comedy
How'd you like the premiere episode of AMC's "The Walking Dead" last night? I really don't want to see critics who complained about cliffhangers in "The Killing" give "The Walking Dead" a free pass because I anticipate the zombie series to use that device throughout the season, as they should be able to.

Last weekend at the New York Comic Con, series co-creator Robert Kirkman, predictably said that the departure of showrunner Frank Darabont had virtually no impact on the show. What else is Kirkman going to say, that the show was trashed by the ouster of Darabont? The premiere episode looked great in my opinion as do the next couple episodes but I think Darabont established a look-and-feel that will, at the very least, last through this season. There's no way a 3rd season of the show won't be coming as the numbers for last night were huge, at 11 million viewers a basic cable record. This is a great cast, I'm pleased that we'll be seeing more of them.
—-
Charlie Day, Emma Stone, and Jason Segal will be the next 3 consecutive "Saturday Night Live" hosts. I'm looking forward to seeing Day and Segal but I think it's too early for Stone to have a 2nd chance to host. Hey Lorne, get Aubrey Plaza as a host stat!

Somehow Anna Faris' turn last weekend held the same numbers as Ben Stiller's round the previous week, both just 10% off of the premiere that had Alec Baldwin as host. The last two weeks have been spectacularly unfunny with the exception of opening sketches. The Faris episode was plagued by stumbled lines, particularly by Vanessa Bayer, and uninspired performances, and a bizarre title card holding the screen for a few minutes near the end of the show. Perhaps there were a lot of last-minute changes this week or perhaps the production is exhausted after running for four weeks in a row but it's clear that they need to make some adjustments. I have a tremendous amount of respect and admiration for what these people do, I'm a fan, I want to support them, but sometimes it's difficult after a show like we saw on the 15th. Don't even get me started on musical guest, Drake, who was typically terrible as most of the musical guests have been for a while now.
—-
I received an announcement from FX this afternoon stating that "Sons of Anarchy" will be back for a fifth season! Congratulations to show creator Kurt Sutter and his wonderful cast and crew.
—-
I also heard from comedian Josh Wolf that the second season of E!'s "After Lately" will be back in November - I'll get you the details as I hear them, but I'm pleased that this show, an inexpensive way to get even more out of the talented writing team and panelists, will be returning before 2012.
—-
Word came out today that E! show host and reporter Giuliana Rancic has been diagnosed with breast cancer. I think she does a good job on E! News and red carpet coverage (although some people hate that kind of thing) and she's been great on "Fashion Police." I met her at the 2010 Oscars, she's a very sweet and intelligent lady, I wish her nothing but the quickest and most painless treatment and recovery.
—-
The Fall Premiere Deathwatch Continues: We've seen "Charlie's Angels" get pulled last week, and "Memphis Beat" over the weekend (never cared for that procedural) - this weekend's episode of "Pan Am" fell another 5% and while I think some of the performers are excellent (hello Karine Vanasse!), the show is more style than substance and it looks incredibly expensive. What I'm really waiting for is when Fox pulls the plug on "Terra Nova," not because I like seeing people out of work, but the show is ungainly, and its fantastically expensive budget could have funded 6 other shows with more originality.
—-
The TV Junkie Must-Watch Plan: "Adventure Time," "Regular Show," "Bored To Death," "Enlightened," "Hawaii Five-0," "Chelsea Lately," "Conan" (2nd half), "The Late Late Show With Craig Ferguson"

9:00pm Bored to Death HBO - Gumball! When Jonathan and Ray go on the lam, George covers for them.

9:30pm Enlightened HBO - Now or Never Amy's hopes for a dream job are shattered; Amy struggles to reform her ex-husband and her mother.

10:00pm Castle ABC - Eye of the Beholder A sexy insurance investigator (Kristin Lehman) with a secret helps Castle and Beckett