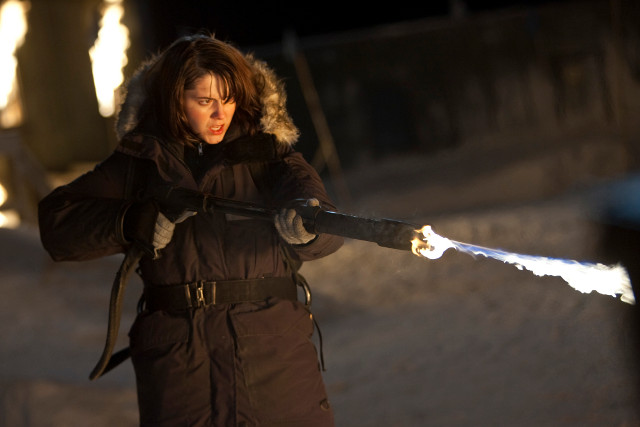 A few weeks ago, we featured the 1982 version of The Thing at the Aero. This weekend, the story continues when The Thing re-emerges from its icy prison nearly thirty years on. Though some have mistakenly called the new Thing a remake, it's actually a prequel, completing the gruesome account of the Norwegian camp hinted at in John Carpenter's original. If you aren't a horror geek & that sentence was Greek, The Thing is an ancient alien discovered in the Arctic which is able to assume the form of any creature it consumes. It's a bloodthirsty beast in its own right, but it's truly terrifying when you can't tell the men from the monsters.

Mary Elizabeth Winstead leads an intercontinental cast, returning to the horror genre after cult comedy Scott Pilgrim vs. The World (hope she kept the fighting skills from that one!). She joins Aussie Joel Edgerton (The Fighter) & Nigerian-Brit Adewale Akinnuoye-Agbaje (Lost) as Americans joining the team led by Dane Ulrich Thomsen (The World Is Not Enough). If you're wondering how that multi-cultural rainbow works at a hundred below, it doesn't. Language barriers between team members build on their paranoia, and if that sounds like a smart bit of sci-fi storytelling, it's because the screenplay sprang from Ron Moore, who revitalized Star Trek & Battlestar Galactica. Will The Thing get under your skin?

The transformation theme continues in The Skin I Live In, the latest from Spanish provocateur Pedro Almodóvar. Dr. Robert Ledgard (Antonio Banderas) is a cut above his plastic surgery contemporaries. The good doctor has spent a dozen years & dozens more bodies perfecting a new synthetic skin, solid as steel yet sensuous to the touch. But on the brink of success, Vera (Elena Anaya), Ledgard's mysterious, unwilling test subject, decides to resist. Will the impassioned Prometheus escape her Dr. Frankenstein's heavily guarded, isolated mansion?

If your primary reference for Banderas is Puss in Boots, he may seem an odd choice for a madman. Yet early collaborations with Almodóvar launched his career, particularly Women on the Verge of a Nervous Breakdown. In their last film together, 1990's Tie Me Up! Tie Me Down!, Banderas played a psychopath who kidnapped an adult film actress he claimed as the love of his life. Anaya is another Almodóvar ally, having appeared previously in Talk To Her. The Skin I Live In was nominated for the Palmes d'Or after its premiere at Cannes, and holds a high score on Rotten Tomatoes. The film opens exclusively at The Landmark & ArcLight Hollywood.

Are you an adventurous film-goer? Check out our weekly guide to the best of LA's repertory theaters, festival series & midnight movies. This week we have special coverage of Home Movie Day & a Cinefamily tribute to Bollywood horror.