Occupy Together: The American Autumn Gets Heated 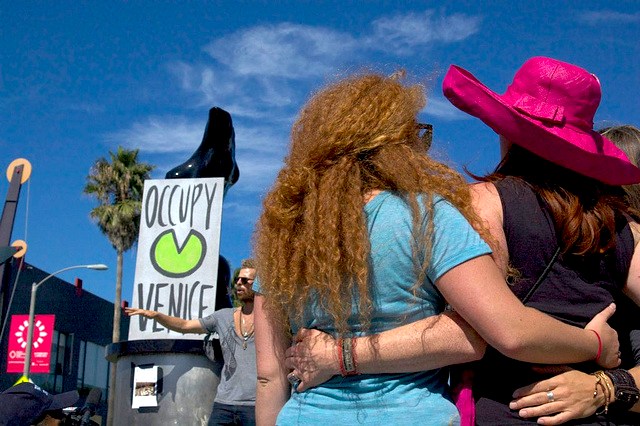 By Katherine Peach/Special to LAist

About 50 or so people wave signs and shout into bullhorns as cars drive by honking loudly in support. This is Santa Monica, in front of the Bank of America where the median adult age is most likely 55. This is part of the 99 percent that no one is talking about.

This is just one protest that is happening like others throughout the country, joining the global movement to bring power back to the people. Everywhere from Omaha, Nebraska to Venice Beach here in Los Angeles, community gatherings are popping up and holding different events. Despite the increasing popularity, there is still the worry that the focus is not cohesive enough to set forth a clear agenda.

This group may be leaderless, but the objectives of the global campaign Occupy Together are clear, “stop the corporate machine, that’s what we can agree upon,” said Julie Levine, member of the Topanga Peace Alliance. Levine, who has seen protests in NYC, Washington D.C. and L.A., attests that public funded elections, as well as corporate and government transparency are top priorities.

Occupy Wall Street organizers attribute the “Arab Spring” to being an inspiration to the protests that have captured the attention of a nation. High income inequality spurred on revolutionary protests in the Middle East causing the Tunisian President Ben Ali to flee the country and Egypt’s President Mubarak to begrudgingly resign after tens of thousands gather in Cairo’s Tahrir Square. 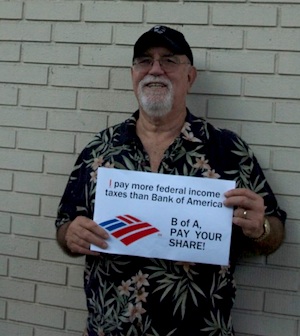 Outside a Bank of America branch in Santa Monica, CA (Photo by Katherine Peach)
Income inequality in the U.S. is higher than pre-Revolution Egypt’s, according to the C.I.A.’s World Fact Book. The richest 400 Americans control more wealth than the 180 million Americans at the bottom. The Centers for Disease Control say the income inequality in the U.S. is the highest in any advanced industrialized nation regarding health outcomes by race, income and gender.

MoveOn, a political action nonprofit that organizes action across the country, bolstered Thursday’s demonstration in Santa Monica; an event that demonstrated the Tea Party is not the only grassroots movement that is taking a stand in this country.

“The bottom line is what no one is saying, that once you make money it’s easy to make more money,” said Lisa Robins, a Santa Monica resident protesting for a reformed system. Robins, who considers herself a moderate, brought her daughter Renata to see what action can really do. Renata had to write a letter to President Obama as part of her seventh-grad class assignment comparing the U.S. to the building of the Roman Empire.

Occupy protests have reached an estimated 700 plus cities that span the globe. Global and domestic eyes are on the U.S. to see how a government with the world’s most expensive army and police forces will react to a massive faction of protesting people.

Occupy Los Angeles has gathered in the unseasonably warm heat since October 1 in front of City Hall in Downtown. They are in solidarity with Wall Street protesters claiming many of the same demands and dealing with the same frustrations. However, Angelenos have the unique advantage of getting support from L.A. City Council; they have been given portable latrines and even an official City Council resolution.

The L.A. City Council agreed to hear the Responsible Banking Ordinance, on or before November 21 that would require financial institutions that do business with the City to report annually on lending activities and community reinvestment goals. This will go before the council that week as a discussion, but not a vote.

Over the past 30 years, both the average and the median wage in America has remained the almost stagnant while the average individual worker contribution to GDP has soared to 59 percent and the economy has doubled, all after adjusting for inflation, according to the resolution passed by L.A. City Council.

More than 20 million American’s who seek work are unemployed. California’ unemployment rate is not reaching 12 percent in September, one of the highest in the country. 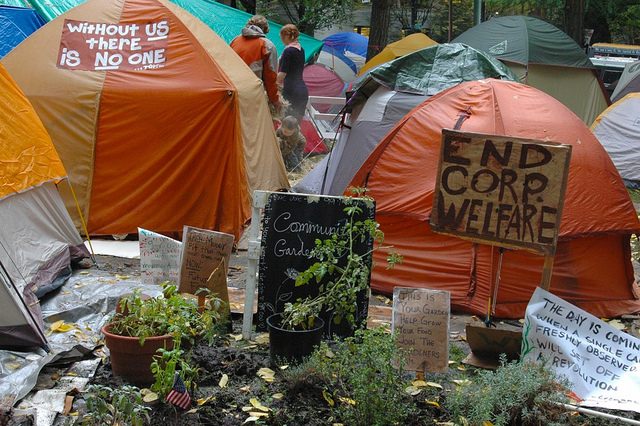 At the Occupy Portland site (Photo by Katherine Peach)

To the north, in Oregon, hundreds of protesters are bunkered in a wooded camp stretching tarps to protect clustered tents from daily rain at Portland’s Chapman Park. Although originally allowed to congregate, Portland Mayor Sam Adams asked protesters to leave from Main Street on Wednesday. The numbers only grew, according to local reports.

New York City Mayor Michael Bloomberg announced on Thursday that protesters will be evicted from the encampment in the financial district in Wall Street for cleaning of the streets, held since September 17 by Occupants. Zuccotti Park was to be cleared for inspection and cleaning starting at 7 a.m. Friday, however Bloomberg's office announced early this morning the cleaning has been postponed.

In a similar protest, police in full riot gear stormed Occupy Boston in the middle of the night on October 10 arresting more than 100 people, according to Occupy Boston’s website— the Associated Press reported only 50 arrests. An estimated 10,000 union members, students and protesters marched to Dewey Square earlier that day. 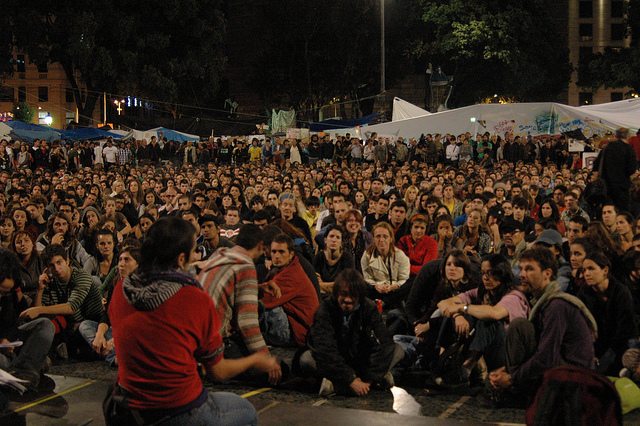 The indignados in Barcelona, Spain (Photo by Katherine Peach)

The reach of Occupy is not limited to the U.S. Calling themselves the indignados in Spain, protesters have held camp in Plaza del Sol in Madrid since May 15, withstanding police confrontations and spreading solidarity with public squares in cities such as Barcelona and Seville. It is the indignados that are calling October 15 the Global Day of Action. More than 650 cities have confirmed they will participate to show unity with a global revolution (this map shows which cities so far have said they'd join in).

Want to get involved locally? Occupy L.A. is holding daily general assemblies with daily updates on events that are held throughout the city. For Westside activities, Occupy Venice is holding meetings in Windward Circle in solidarity with the Occupy Movement.

While the U.S. might be slow on the draw, the sheer numbers attest to the power of the masses. One thing is still unclear: How will this all end?