Marc Maron's 'This Has To Be Funny' & More 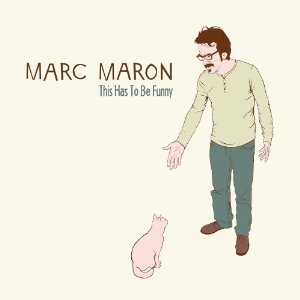 Maron Maron's latest recording, "This Has To Be Funny," is well worth a listen - particularly for those people only familiar with his WTFpod.
Tonight Marc Maron will be a part of The Comedy Club with Jesse & Jordan at the Ice House in Pasadena. The show, hosted by MaximumFun.org's Jordan Morris and Jesse Thorne, will also feature Chris Fairbanks, Al Madrigal (a fave of ours) and DC Pierson, so you are in for a great time if you make it to this show.

You can also see Maron at Nerdmelt's The Dork Forest With Jackie Kashian on October 20th, with Sarah Silverman & Friends at the Largo also somehow magically on October 20th, and for a live recording of Maron's WTF Podcast on October 25th at the Steve Allen Theatre.

Late last spring I had the chance to interview Maron just before watching him do two shows in a row at a comedy club as a headliner. The shows listed above feature a lot of stand-up comedians but they are not, with the possible exception of Sarah Silverman & Friends, stand-up comedy shows.

I'm a religious listener of Maron's world-famous WTFpod and have been lucky enough to attend a live recording and I urge you to go to his October 25 show if you have the chance. But true fans of Marc Maron listen to WTFpod not for the guests, as most of the guests also appear on late night TV or other podcasts, but for Maron and his voice, particularly the approximately 10 minute intro to each interview where it seems like Maron is extemporizing (but I'm not so sure it's a free-form, beatnik-on-a-rant, blast of ego into a mic). If you listen to the podcast and see him live, you will see the connections, you will realize that the best bits of material are further massaged and crafted into messages and themes that he brings to the stage to explore with the people who are there with him.

You will definitely get an appetizer of this kind of sharing at any of the above shows but it's not the full meal. I'm writing this as someone who has been spoiled by seeing multiple full-sets of Maron in action, and it's electrifying in addition to being very funny. Maron doesn't tell jokes at his audience, he gets into a situation with them.

This brings us to his most recent CD release, This Has To Be Funny, released a couple months ago. It is the fourth live show recording he has created in the last 10 years. Recorded at Union Hall in Brooklyn late last year, this recording might be enough to tide you over until you get a full headliner show of Maron somewhere somehow in the not-to-distant future. The CD gets you about an hour and twenty minutes of Maron presenting his neurosis to the audience, all the while knowing that we all have them too: it's the human condition.

My favorite segments were "Earl's Rooter," which related Maron's experience helping out a sewage-line rooter guy, and "The Creation Museum" which is only available with the album and is the meat of the recording. For someone that often talks about his struggles and how he might be down on himself, there is plenty of laughing about the situations he gets into and the circumspect logic that may have got him there.

This Has To Be Funny is a must-have for any Maron fan, obviously, but I highly recommend it to anyone who has only heard the WTF Podcast and who are on the fence about seeing him headline a show. This recording proves that Maron isn't just a consummate interviewer, he is also a devoted student of comedy who has been exploring the medium for a quarter century and has used that knowledge to successfully present his unique perspective with This Has To Be Funny.

[We're also very hopeful for a Marc Maron sitcom next year - Maron shot a treatment of the show complete with actors like Ed Asner. The test was unveiled at the New York Television Festival a few weeks ago to an enthusiastic response, what more do you need Hollywood?]