At 19 years old, Sand One has put her art up all over the city, from walls in East L.A. to galleries in Hollywood. She's at the forefront of a small but growing group of young female street artists who are breaking down expectations about what has long been considered a male-dominated field.

A self-described "little five-foot girl in heels," Sand is blazing this particular trail with style and humor, in addition to a healthy dose of chutzpah. She chatted with us about her work, her goals and why we shouldn't call what she does graffiti.

LAist: What's your signature style?
Sand One: I do cartoon-y females with attitude and swag, painted huge on walls, trucks, corn carts and mobiles. They have big, eccentric eyelashes and fruity colors, and lots of L.A.-influenced tattoos, like three dots that signify "my crazy life," an L.A. logo, the number 13, penitentiary-influenced tattoos and anything that reminds me of my "Lost Angeles" culture.

My style embodies the female of today, the thug girl in me, and the teenager in all of us, discovering her city horizons, body and joys.

LAist: How did you get started doing graffiti?
SO: I do art on the streets. Maybe it looks like graffiti, but it's not. My art form can be classified as chick urban street art.

I've been seriously invading walls, trucks, and galleries for three years now. It's a lonely sport, but I love doing it. I love the powerful feeling and the satisfaction that I get after painting a mural that's three times larger than five-foot me, with my own little hands, some paint, an idea and an extendable ladder. 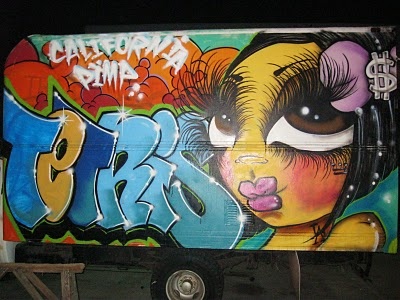 
LAist: So, I clearly made a mistake in calling your art graffiti - can you explain how it's different?
SO: Don't get me beat up! It's almost the same thing, but the fact that I don't go out at night and jump bridges or run into freeways is what makes what I do different. Graffiti has lots of letter styles, and it involves this sexy danger. My art has this clean and nice image — graffiti isn't supposed to be nice, it's rugged and hardcore.

Street art is the artsy side of it, the nice side of it, the gallery, the limelight. It's not as hardcore. Raise your glasses to both forms, they're the best forms of art at the moment here in Los Angeles.

LAist: Is it harder for female artists to make a name for themselves in street art and graffiti?
SO: You have to have thick skin to be in this world where it's male-dominated, and they feel threatened by your presence. A lot of guys see me in my heels, painting girls and cartoons, and they get angry. They try to get crazy with me, even try to take my paint away, but it's cool — I'm hood so I let them have it!

Once, I was at an art exhibit on Fairfax and Melrose and I was drawing on people's blackbooks (sketch books). This guy who's an L.A. graffiti vandal walks up and sees it's me, and suddenly he's so angry! He says, "So it's you, you've been doing cartoons all over the city. I have no respect for legal graffiti."

I'm like, oh my gosh, he's gonna punch me...but so what? I'll take a punch for my Sand Chikz (just punch me in the stomach please, not the face). He's like, "I have three daughters and sisters so I respect what you do, but I've never made a cent off what I do, I believe that graffiti should stay illegal. I'll never fucking paint a wall with you."

That was the joke of my night, but still I admire it — that he had the nerve to walk up into a crowd and attempt to shatter my passion for art. 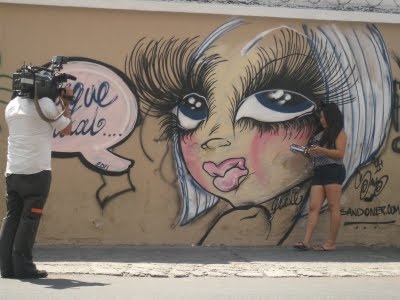 
LAist: Do you ever get scared?
SO: I wasn't scared. It's the lifestyle that I want to live, and I want to experience everything that comes with this world. It's not boring; it's exciting. I've done trains and other underground stuff, but I'd rather put art on a corn cart or a meat market and give back to the neighborhoods. It's just a different way of doing things.

And my girls, they're cute! They're supposed to bring happiness, and make other girls understand that there's street art for us to enjoy.

LAist: What inspires you about L.A.?
SO: I love L.A. I listen to Too Short, Tupac and Snoop Dogg a lot, so it keeps my gangsta swagger and hustle on point. It's so much of everything in L.A. — too many taco stands, too many girls, way too many bums, not a lot of men and tons of greatly skilled artists. So that significantly motivates me to hit the ground harder and seek opportunities instead of waiting for them to arrive in the mail.

L.A. changes you; it's competitive. I originate from the heart, East L.A, where the freaks come out at night and ambition runs low. I consider myself a hustler, a little Mexican gangster, and the fact that I was born and raised here in L.A. made me who I am.

LAist: You've had your work shown in galleries, you're well known in the street art community, and you've collaborated with clothing companies — and you're only 19. Where do you want to go with your art and your career?
SO: Well, I would like to one day get off EBT so I don't have to pimp the government, and get rid of having a baby sitter that follows me everywhere — I'm grown! Just kidding. I'm not sure. I just enjoy painting. It makes me so happy every time I paint a new mural, join a new art exhibit or travel to a different city or country and leave my mark. I'm proud to come from nothing, and to have slowly begun build something that's made heads turn.

I'm very focused on my aspirations; I want to be a great artist. I aim for perfection. I don't go to school to perfect my craft, I take it to the streets. I'm not afraid of criticism or of not being accepted. I enjoy painting huge cartoons with cheesy smiles all over the streets. It keeps me sane. The streets are my canvas, sketchbook, diary.

LAist: What do you like about the street art scene right now?
SO: There's a lot of positive stuff. I'm happy to be a part of the new up-and-coming street artist culture. I know our art is very different and some of the elders have a hard time accepting it, but so far I've been very welcomed.

In regards to females, they're very distinct and limited, so big ups to the women out there that are truly getting their asses up and running around the streets making their presence felt. This is a man's world. But it wouldn't be nothing without a badass L.A. woman. 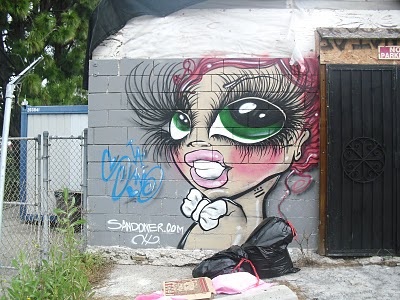 
LAist: What are you working on now?
SO: I'm doing a mural in the Culver City arts district. I was trying to get this very famous underground graffiti artist, MQ, to agree for over a year, and finally I got him to paint with me. He was very open-minded to working with me and painting a huge wall. It's been two weeks that we've been doing this. The wall is very cool, it's me coming together stylistically with someone old school that I look up to for having been around the graffiti world for so long, and making a name for himself by systematically painting what he loved and believed in. MQ you are awesome!

LAist: Do you still live in L.A.?
SO: I'm still in East Los Angeles. I've been exploring different countries and cities as well, but I always end up coming right back to the place I know: home, with my mama and my little brother and sister, and all the awesomely delicious daily leftover food that my mother brings me (she has a Mexican/American lunch truck).

I'm here to live the one life I was given and run around town painting pretty girls with cheesy smiles, long eyelashes and a meaning behind them, empowering today's L.A woman. My motto is "stay hungry, never full."