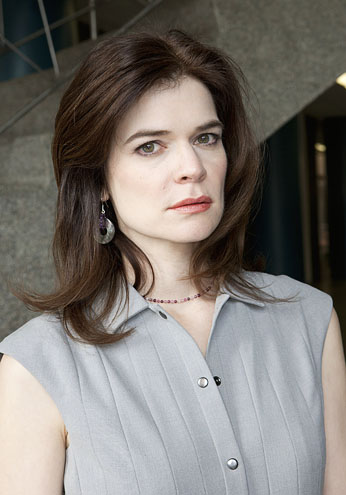 Betsy Brandt plays Marie Schrader in AMC's "Breaking Bad' which will have its season finale tonight at 10 p.m.
Tonight at 10pm will be the season finale of AMC's "Breaking Bad" and it's at the top of our must-watch list. The reactions to every episode this season have echoed on Twitter for days after airing and it's obvious that the show is much-admired not only by the public but other actors, showrunners, and network executives, making it all the more plain that AMC was never going to let the show disappear from their lineup despite the rampant and unfounded rumors from earlier this summer. There have been many amazing moments this season and while we don't like revealing spoilers, we did mention some specific scenes with one of our favorite actors, Betsy Brandt, who plays Marie Schrader, wife of DEA Agent Hank Schrader, who was grievously wounded last season.

Marie is the most consistently sympathetic character in the show at this point. Yes, she's a bit of a kleptomaniac, but despite her nosiness she's devoted to the happiness of her husband and her family and she feels like somebody you know in the real world. As Betsy said, "perhaps she's someone in your own family, and you have to love her." The familiarity and humor of Brandt's character always makes me look forward to whenever she appears in a scene. Brandt herself has some hilarious ideas about who on the show she would like to have scenes with and how they would come about.

While it's sad to know that we won't be seeing the show again until next Summer, I'm not sure how much more of this rollercoaster I could take from week to week. Every aspect of this show should be nominated for an Emmy next year, and that still wouldn't be enough. Before tuning in tonight, read the particular insight Betsy has about her character as well as the show itself. "Breaking Bad" airs at 10 p.m. on AMC.

Thomas Attila Lewis: I wanted to know what it feels like to be in a show that has been so rewarding to its network as "Breaking Bad" to have heard all these reports of a battle to keep the show on AMC?

Betsy Brandt: Honestly, for me, there re two things: I never count on a season until I'm moving there to do it and when we started this show [show creator] Vince [Gilligan] said he couldn't see it going past 3 seasons [laughs] but he's a man with a plan so he knows where he wants the show to go. The situation is also like a relationship — nobody really knows what it's like in someone else's relationship besides the two people in the relationship. I have no idea what those negotiations were like — do they get heated? Were they screaming at each other? I don't know what they do, they don't ask me, but AMC has always felt like home to me and AMC took a chance on this show when no other networks would. People weren't lining up to do a show about a high school teacher who cooks crystal meth but AMC said "Yeah!" and I thought that was really ballsy of them. It was only their second show and they have maintained their interest in the spirit of the show.

TAL: I wanted to mention the first episode of this season, the box cutter episode: intense is not a strong enough word.

Betsy Brandt: I told Giancarlo [Esposito aka "Gus Fring"], "That takes your character in a whole other direction, as if your character could be any scarier. Your character isn't someone who kills people, he's a killer — to do that and then have him wash his hands and then go about his day. What do you do after that? Go play Solitaire on your computer?" If anybody would it would be him. It was amazing to watch him do that scene, I was there when they shot it that day.

TAL: It's like the breaking down of an enigma. Do we really want to get in there? We should be backing away from this.

Betsy Brandt: I told him, "When you removed your shoes it put a chill down my spine." And he said, "That was the moment for me." He couldn't be sweeter though. I was so tickled to have a scene with him last year, very happy that our paths crossed. I'd love my path to cross with Aaron Paul ["Jessie"]. He could get community service for dealing or something, and I could get community service for my stealing. That would be fun! But now Aaron Paul's character is way past community service. I do have a scene with Jonathan Banks but I'd like to also get together with Saul Goodman.

TAL: Did you just reveal that you won't be meeting Saul Goodman this season??

Betsy Brandt: Oooh [whispers] oops... I do love Bob Odenkirk so much, I would love for it to happen.

TAL: Can I ask you about a big moment that Marie had this season? It was so sad when she broke down at the police department. That's when we all realized how much pressure she was under from helping with Hank's rehabilitation, where she was creating these alternate idealized realities for herself.

Betsy Brandt: It was awful, Tim asks her if she wants to go home and she says "No" because that's the last place she wants to go. I know in her heart of hearts that she's so happy that Hank is alive, but it's not easy being anybody's punching bag no matter how much you love them. Being a cop is a huge part of who Hank is, and I've become good friends with a real DEA agent and his wife in New Mexico, and we're really close now. He's come by the show and helped us out a little bit. It's amazing how much a part of his identity being a policeman is.

TAL: She uses his badge, essentially, he's a shield for her, literally.

TAL: "Breaking Bad" is such a great show in that from episode to episode, I don't understand how it can go on. There is so much tension, so much anxiety.

Betsy Brandt: Every season it gets better and better, I'm so proud of our writers. And we have these producers who can take it from the page and make it breathe on the screen. I know I'm lucky, this is a great gig, it's an amazing job for an actor to have.

But you know, Marie is not the most likable character all the time. I hope it comes across that she's a good person, but she can be difficult, or really annoying, but I hope it's clear that she loves her family. I think she can be specifically fun! I don't think you'd want to be stranded on a desert island with her but she's a good person. Vince had very specific ideas about her right away — what he wanted her to be. I said "You can't have a family where everybody is really fantastic, that wouldn't be real."

TAL: She can be really nosy but at the same time, nobody else is inquiring about how Skyler is doing, or the health of other people, including Walt — she's the one!

Betsy Brandt: In season one Vince said that she understood Walt in a way that nobody else does. There are similarities between the two of them and I loved that we got to see that when she sided with him about his not wanting to get chemo. I think she was hoping that he would because she loves him and wants him to stick around but she was the only one who respected his choice and stood by what he wants. I was also proud of her last year about how she handled the situation when Hank got shot - she's not afraid of anybody. Every year I ask Vince to give her a gun, "Give her a gun, she's a really good shot, who knew?" [Laughs]

What's funny is that everybody knows somebody like Marie, perhaps they're even in your family. You have to love them. She would stand by her family through thick and thin. She's there whether you want her to be or not — she shows up. She's very faithful.

TAL: There was a key moment this season when she appeared at Skyler's door and saw Walt's car in the driveway...

Betsy Brandt: She's pulling for them, she's a cheerleader. And I am like that in my life! [Laughs] Once a cheerleader always a cheerleader, and it's true, especially with kids, even more so. My daughter had her first sleepover a few weeks ago and it was so much harder on me than on her. She said "I can do this because I believe in myself." And I said "Yes you can!"

TAL: As a viewer, I've got to tell you that this is a tough show to watch at 10 p.m. on a Sunday night. It gets me all worked up, induces anxiety, leaves me hanging, and I'm supposed to go off to sleep?

Betsy Brandt: Oh I know. It's funny when people say things like that about the show. I love the moment that "Breaking Bad" takes, to me it's what makes the show stands out. It's what puts it beyond so many TV shows and films — it's there, it's in the script when we get them, it's phenomenal what the writers come up with. If I didn't know that they were good people, it would scare me.

TAL: The show lets scenes play out, every second doesn't need to be filled with dialogue or jump cuts or something happening in the frame. It's what makes it feel so filmic. There are many episodes that feel like standalone movies. It's like a whole bunch of movies that are strung together instead of episodes.

Betsy Brandt: What's happened is that it makes me look at other projects in a whole different way. That's been the biggest change for me as an actor since I started this show. It's really fun to get this meaty material, both the grim stuff and the funny stuff. Sometimes the truth is really fun - saying something that's true, that nobody else would say, that can be funny. But the show isn't grim just to be grim, it's grim because it's real and it's funny because it's real.

The season finale of "Breaking Bad" airs at 10 p.m. tonight on AMC.