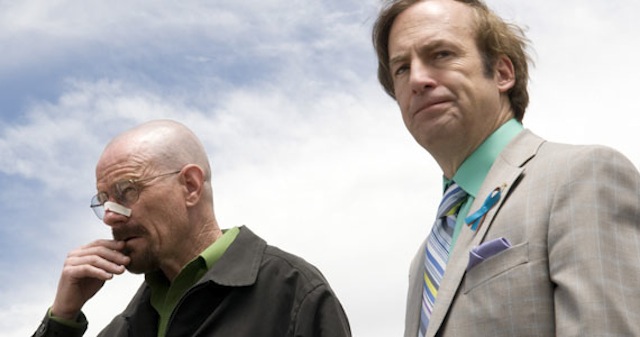 Sunday at 10pm is the season finale of AMC's "Breaking Bad" and the plan is that this is the next to the last season finale for the show. Perhaps it's because more people have been using twitter this year but I've never seen a show generate so much feedback from other showrunners, actors, comedians, and TV network marketers as "Breaking Bad" did this season. These people are saying that there aren't enough Emmy awards to give to this show and I've got to agree with them as most of the dramas out there should fall into the "also ran" category, even the really good ones (non-primetime broadcast crap).

The departure of "Breaking Bad" will somewhat simplify Sunday night viewing options but only so much as Showtime's excellent "Homeland" is in the mix. If you had misgivings about the show, stick with it until the 3rd episode when everything clicks into gear. Yes, there are some annoying things about Claire Danes' Carrie Anderson, like the whole "jazz fanatic" bullshit, but thankfully the plot carries (no pun) us over these unfortunate choices.

Sunday has also been complicated by some amazing silent films presented by TCM focusing primarily on Buster Keaton. From features to 25 minute shorts, the vision of the man is unparalleled - "The Playhouse" short from last week was unbelievable, where Keaton created the illusion of 20 versions of himself interacting with each other in a film from 1920, no CGI or green screens available. This continues this Sunday with The Cameraman, another iconic Keaton film that many other filmmakers have tried to emulate over the past 80+ years.
—-
Ryan Murphy may have "Glee" and "American Horror Story" but that's not enough as he will be shopping around a half-hour comedy today. He will be working on it with the very capable Allison Adler whose work on "Chuck" and "No Ordinary Family" I have admired.
—-
Check out the video clip at the bottom of the post of Conan O'Brien visiting his old set at "Late Night With Jimmy Fallon." Conan was in New York to get ready for his week-long broadcast from the city at the end of this month.
—-
The TV Junkie Must-Watch Plan: Tonight - "Nikita," "Fringe," "The Soup," "Fashion Police," "Real Time With Bill Maher." Saturday - "Saturday Night Live." Sunday - "Boardwalk Empire," "Breaking Bad," (then on repeat) "Homeland," "Dexter," "Hung"

8:30pm SoCal Connected KCET - Taking a look at fat and skinny ZIP codes and the correlation between park space and overall health in "Park Poor"; an investigation of a new plan by Walmart to move into neighborhoods previously denied to them in "Big Box Invasion."

9:00pm Fringe Fox - Alone in the World The Fringe team investigates when the bodies of two 12-year-olds are found in an advanced state of decomposition just hours after bullying another boy; Walter grows more and more distracted by hallucinations.

10:30pm Fashion Police E! - Whomever is writing these jokes with Joan Rivers is doing a great job because it makes a fashion show watchable.

9:00pm Dexter Showtime - Once Upon a Time

10:00pm Hung HBO - Take the Cake; Are You Packing? Ray's client is stolen by Jason; Lenore learns a secret about Jason; Jessica tries her hand at independence; Charlie asks Tanya for a favor; Ray meets a client who likes to dress up as a cop.

10:30pm How to Make It in America HBO - In or Out Ben and Cam get an opportunity to crash a brunch with a well-connected host; Cam wants to move out of his grandmother's place; Ben gives Julie his spare key; Rene leans on a client; Rachel gets a new job.