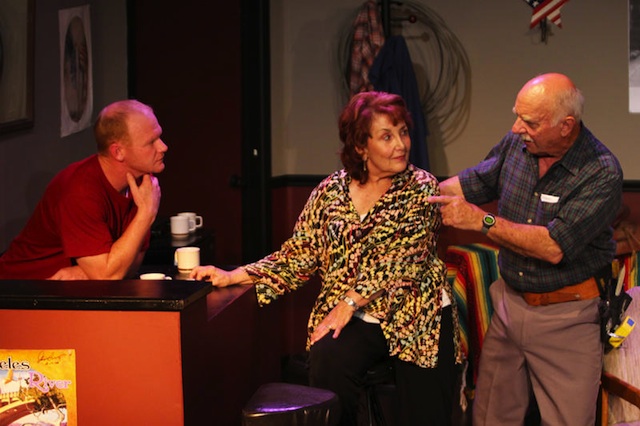 Ted Ryan's urban-cowboy drama, Pulling Leather, is currently playing at Actors Forum Theatre in North Hollywood. The plot follows a good-natured competitive rodeo rider through a low point in his career as he uncovers a dark family secret and falls in love. While Pulling Leather is perhaps overly sentimental and saccharine with overused character types, it does feature some good comedic moments, several plot twists, capable performers, cowboy charm, and excellent direction.

In addition to writing the script for Pulling Leather, Ryan also leads the cast as Jacob. Ryan is perfectly suited to the understated character, portraying Jacob with tempered machismo and sensitivity. The remaining roles of Pulling Leather are considerably less original, but the cast brings some authenticity, warmth, and tremendous energy to their roles. Christopher Sloan is particularly entertaining as Jacob's best friend, Cliff. Sloan has excellent comedic delivery and his dramatic instincts are spot-on.

Audrey Singer is a competent and effective director that makes broad, natural use of the stage for Pulling Leather. Singer is a local theatrical gem in and of herself, well-known for directing and self-producing new works from emerging artists in her own home-grown, welcoming, tchotchke-filled theatre. The uniqueness of her ctors Forum is totally endearing.