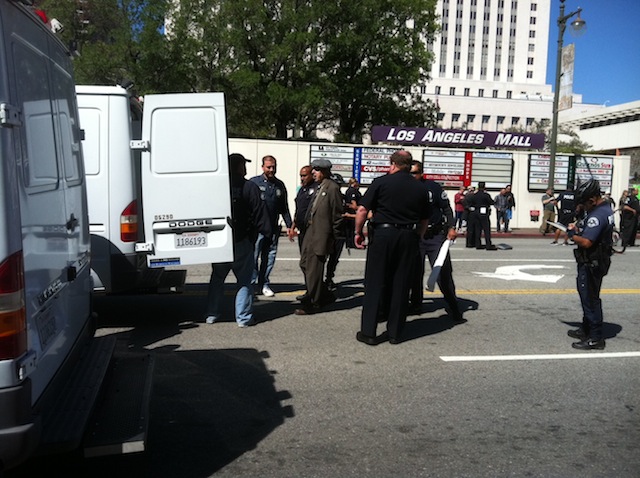 Photo by @kimbui via Twitpic

Fourteen people were arrested for blocking traffic at an interfaith anti-war rally protesting the tenth anniversary of the war in Afghanistan this morning, according to the Associated Press.

To be fair, the group in question Interfaith Communities United for Justice and Peace warned us that they would be arrested this morning. (They promised us 20 arrests instead of 14.)

The protest, which incorporated religious leaders from many faiths, was scheduled to go from 9 a.m. until noon. Participants planned to engage in civil disobedience as they marched from La Placita Church at 535 N. Main St to the downtown Federal Building, where a blessing was planned.

MASH actor Mike Farrell showed up to the protest, according to AP. He said he believes the war has wasted billions of dollars without making a dent in terrorism. Farrell also says he's disappointed that President Barack Obama, a Nobel Peace Prize winner, has continued the war.

There were about 100 other people who were part of the demonstration and KPCC reported that they represented a broad swath of Angelenos: there were young college students as well as a group called Grandmothers For Peace.