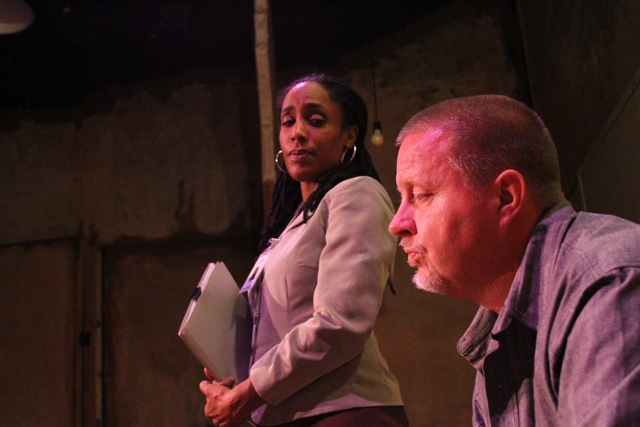 RJ Colleary's underdog drama, Addition by Subtraction, is currently playing at El Centro Theatre. The plot follows a misunderstood and unlikely avenger as he attempts deliverance through vigilante tactics. Addition by Subtraction lacks originality but does feature capable performers, emotionally charged monologues, and a thoughtful set.

John Lacy brings depth and subtle stoicism to Addition by Subtraction's integrity-bound protagonist Patrick. Lacy is a poised and convincing lead that brings believability to the story through skilled performance. The supporting cast is comprised of equally strong and complementary performers: Lyn Alicia Henderson's portrayal of Officer Forrester is energizing and bold. Marcus McGee brings warmth and grace to the key role of Father McGee. Ann Rickhoff's versatility is easily apparent as she transitions her character AJ through humorous, desperate and contented moments. Ben Tichy flawlessly executes the role of Farley. Carlos Moreno deftly brings comic relief to the otherwise dramatic work. Direction by Kathleen Rubin is fluid, well-timed, and engaging. Set design by Adam Hass Hunter and lighting by Matt Richter are excellent.

The adept cast and direction makes Addition by Subtraction watchable, but the writing is comprised almost entirely of pop culture stereotypes and cliches that are grossly predictable and tiring. While always quick, the sheer number of scene changes leaves the audience waiting in the dark frequently through seemingly constant scene changes — time that could have been used to give the work pithiness and depth. The structure of Addition by Subtraction seems like an odd fit for a stage and perhaps was originally intended for television...complete with opportune commercial breaks. The script has numerous brief scenes that all seem to unnaturally end with overly-dramatic cliff-hangers and formulaic use of stereotypes to convey character traits. While this reviewer does appreciate Colleary's inclusion of strong female characters, the Hollywood-ized, unrealistic representation of non-syndromatic mental delay in the role of Megan is tacky.

Note: Addition by Subtraction has alternating performers for some supporting roles.