Seasonal Eats: Feijoas are Falling from the Trees! 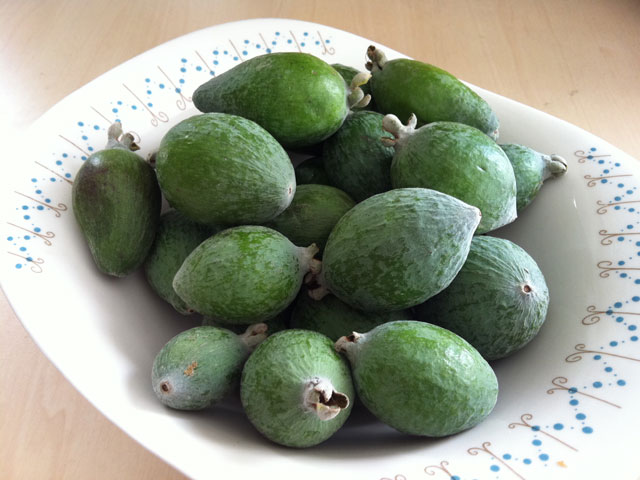 I was lucky enough to grow up in a home with a feijoa tree, but I've had a hard time convincing people around me to get excited about them. Why? In part, the feijoa is a delicate fruit, and only the hardest, least-flavorful ever appear in supermarkets. They're unfamiliar, and seem not to be worth buying. Feijoas have origins all over South America, and can be found as a garden plant in New Zealand and Azerbaijan.

Today, they grow in many temperate areas of the United States as both a shrub or a tree. In a climate such as we have here in Los Angeles, feijoas are often grown as backyard fruit, similar to loquats, and anyone who has lived with this fragrant tree has grown to love them. When I saw these for sale at the Hollywood Farmer's Market, I excitedly bought a bag to enjoy this week.

I grew up calling them by one of the common names, pineapple guavas, which describes their slight pineapple-like sweet-tart flavor. The life cycle starts with a lovely, aromatic flower that has four porous pink petals which are delicious, attracting birds and bees for pollination, and collected for use in salads (I used to pick them right off the tree and eat them). The fruit itself is about the size of a chicken egg and remains a deep green through ripeness, which is indicated by dropping from the tree and having a bit more softness when lightly squeezed. They have a slightly gritty texture, and have sometimes been used as a facial scrub for both the grain and acidity. On the nutritional side of things, feijoas have a glycemic load of 10, and are a good source of Folate and a very good source of Vitamin C.

Enjoy feijoas straight off the tree by cutting them in half and scooping out the flesh with a spoon. Whirl them into your favorite smoothie, or try this feijoa shake. Contrast the fragrant fruit with rustic flavors of salad of prosciutto & grilled feijoa with hazelnuts, arugala, pecorino romano & parsley oil. Use them in tropical salsas, like pineapple guava habañero salsa.

To pair feijoas with savory flavors, work them into sauces, like this simple feijoa sauce with mustard and sugar, or cook them down with other fruits into feijoa chutney. They can be used as any simmering fruit along with braised meats, as with this feijoa chicken recipe.

Many uses for feijoas involve accentuating their flavor with sweetness, so on to desserts! Spread a touch of the flavor onto other favorites with this feijoa compote. This round-up of five recipes includes chocolate feijoa cake and feijoa sorbet among other great ideas. This feijoa cake with cream cheese icing and feijoa caramel upside-down pudding sound fantastically decadent. For some nice breads, try feijoa ginger muffins or feijoa, date and ginger loaf. If you're looking for a couple crumbles, try out four-fruit crumble or go tropical with feijoa and banana crumble.

If you're lucky enough to have an abundance of fruit from a tree, some preservations you might want to try include soaking fruit in vodka for a feijoa-infused vodka, or making various jams and jellies. Try your hand at feijoa fruit leather roll-ups, or if you're into fermentation projects, here's how to make feijoa wine. 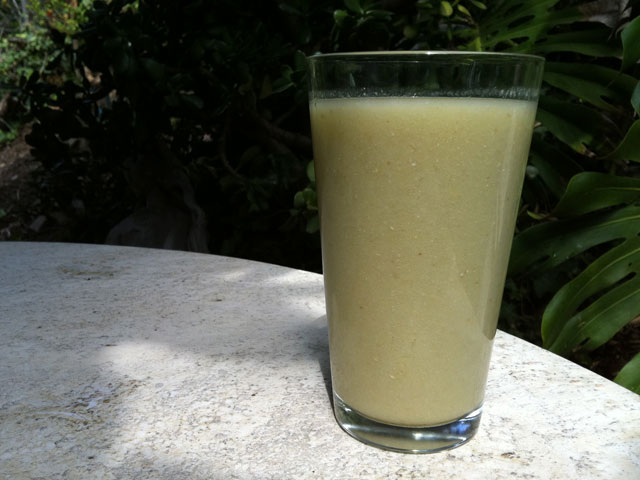 Cut feijoas in half lengthwise and scoop out the flesh with a spoon. Put all ingredients into a blender and blend on high to a uniform, frothy consistency. Pour into a pint glass and enjoy!