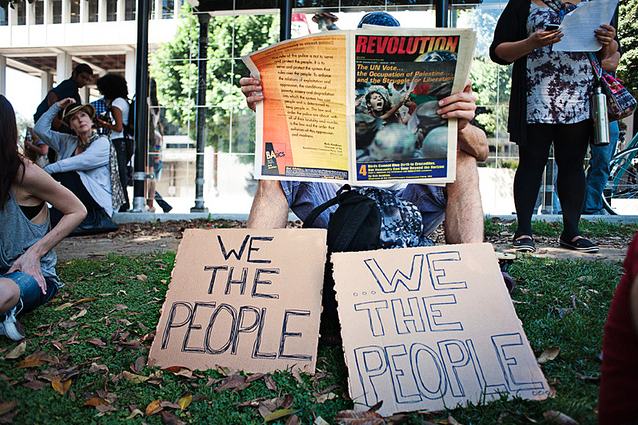 Photo by Ariel.. via the LAist Featured Photos pool

Just how long will the one hundred or so people camped out on the streets in front of Los Angeles City Hall stick around? The Occupy LA protesters say they'll stay until December, reports ABC7.

The protest has gathered some steam through its October 1 start and into the workweek, with more media outlets taking notice and covering the story.

The Occupy LA movement is being done in solidarity with the Occupy Wall Street demonstrators in New York City. The "Occupy" movement participants say they are citizens who represent 99% of the population who is not wealthy, and they blame the banking business for our current stagnant American economy.

The demonstration in Los Angeles has so far been peaceful, and the Los Angeles Police Department have spoken with participants, and say they are okay with the group staying put until December.

Monday morning, the group moved towards where the Dr. Conrad Murray trial was taking place. They also took part in a march to the Financial District Monday afternoon.