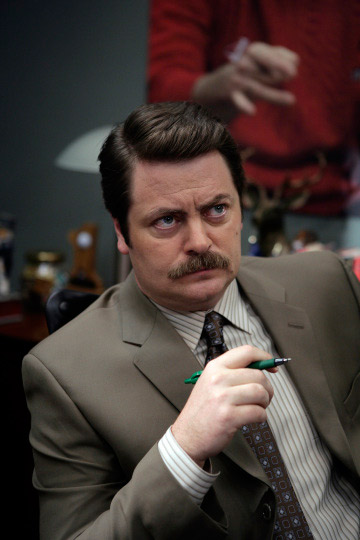 Nick Offerman's Ron Swanson is the focus on tonight's "Parks and Recreation" (NBC @ 8:30pm) and we couldn't be happier about that.
"Sons of Anarchy" fans will want to stay up late or set their DVRs to record "Last Call With Carson Daly" (NBC @ 1:35am) as Kurt Sutter will be the featured guest! Speaking of late night guests, Jonathan Ames was typically fantastic on last night's "The Late Late Show With Craig Ferguson," leaving the usually unflappable Ferguson speechless on at least a couple of occasions ("Bored to Death" returns to HBO on 10/10 at 9pm).
—-
Well thank god for my weekly comedy/TV podcast posts here on LAist because the Hollywood Reporter finally did a story about the phenomena and it features an interview with Adam Carolla, Marc Maron, and Greg Proops. Hey THR, drop me an email and I'll tell you where to send the check.
—-
We talked with "CSI" creator Anthony Zuiker about a year ago and he mentioned that he had several irons in the fire and it looks like ABC has picked one up: "Chameleon" is a drama that revolves around a female FBI undercover agent, and it will be produced by Zuiker. While the fans of "CSI" are legion, it's good to see this inventive guy do something different.
—-
If you're a TV fan at a loss of what to dress up as for Halloween, check out the Halloween deals at the HBO shop which include "Boardwalk Empire" hats, "Eastbound & Down" mullets å la Kenny Powers, and tons of "True Blood" get ups.
—-
The TV Junkie Must-Watch Plan: "Community," "Parks and Recreation," "The Office," "Whitney," "It's Always Sunny In Philadelphia," "Archer," "Chelsea Lately," "The Colbert Report," "Jimmy Kimmel Live," "NTSF:SD:SUV::," "Last Call With Carson Daly"

8:00pm Community NBC - The Geography of Global Conflict Chang gets used to his new job; Britta reacts to a friend being taken hostage in a foreign country; Annie asks the group to help bring down her new friend; Professor Cligoris struggles to behave appropriately.

8:30pm How to Be a Gentleman CBS - Series Premiere. Pilot When a fussy columnist is told to adapt to the modern and sexy style of his magazine, he turns to his former high-school bully for balance.

8:30pm Parks and Recreation NBC - Ron & Tammys Leslie has to get involved when Ron's first wife re-enters his life and starts controlling him; Ben helps Tom with his new company; Ann makes a public service announcement with Chris.

8:55pm Person of Interest CBS - Ghosts Reese and Finch question the machine's reliability when they are asked to investigate a teenager who was killed years earlier

9:00pm The Office NBC - The Incentive Robert challenges the office to double their sales; Pam finds an unlikely pregnancy friend.

12:15am NTSF:SD:SUV:: Adult Swim - Twistin' the Night Away Sentient SUVs take NTSF hostage; Sam must work with a new team member; Trent searches for the culprit.

1:35am Last Call With Carson Daly NBC - Kurt Sutter, the creator of "Sons of Anarchy"