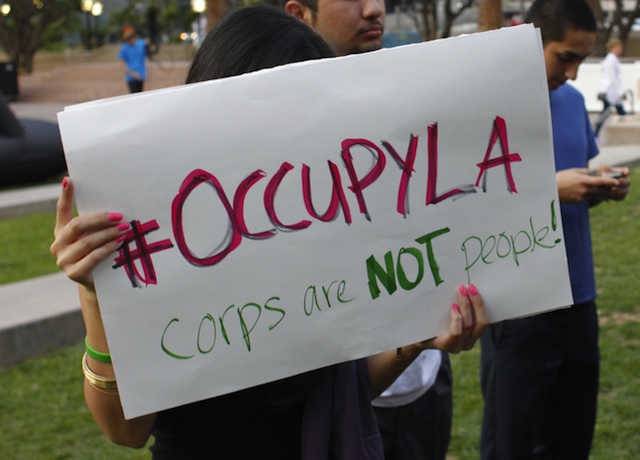 As part of a growing national movement in solidarity with the Occupy Wall Street effort, a local group has mobilized and will set up a similar protest in Los Angeles' civic center this weekend.

Occupy Los Angeles describes itself as a grassroots movement. They articulate their demands as follows:

We want a government that actually works for the people. We want a SEPARATION OF CORPORATIONS AND STATE in the exact same way as we have a separation of church and state. We want to STOP the unjust oppression before it is too late, and it will soon be too late.

The group is making widespread use of social media tools to get the word out about their mission and their move-in to City Hall this weekend, which in part may be a strategy developed in response to what Occupy L.A. seems to see as a lack of media coverage of the movement. The group's tagline: "The Revolution is Happening.... It's Just Not in the News." Facebook, Twitter, Flickr, and Tumblr sites are housing updates and chronicling the movement.

So just what will go down this weekend with Occupy L.A.?

At 10 a.m. on October 1, the group will march from Pershing Square to L.A. City Hall, and at noon, the "occupation" is set to begin. Participants are urged to bring tents, sleeping bags, food, hygiene products, protest signs, and other items to help sustain them through days and nights. 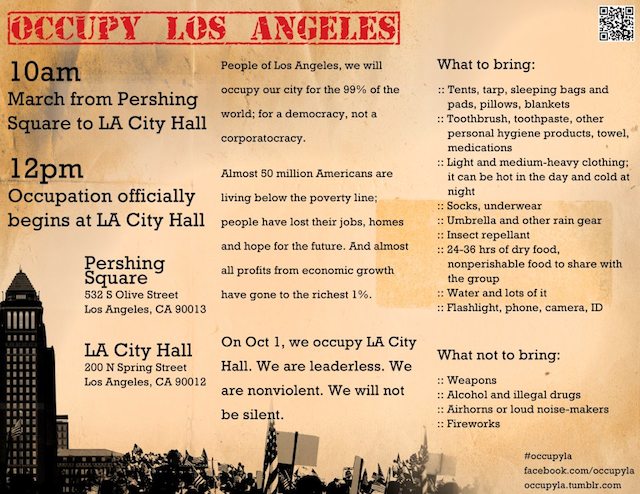 The group explains why City Hall is their chosen location:

City Hall and the surrounding Civic Center are strategic locations for many reasons, we are on the front doorstep of government, albeit city government, it is located in the heart of the city and it is within a few short blocks of an area downtown know as Banker's Hill where several large banks have either corporate headquarters of regional branches.

Occupy L.A. says they want the event to peaceful, and points to their proximity to the Los Angeles Police Department's headquarters as more reason to maintain their peace and observation of the law. Occupy L.A. adds:

We are a wide cross section of Americans of all ethnicities [sic], ages, and diverse political leanings that have come together to demonstrate their abject displeasure with the way both Government and corporqte [sic] America have formed an aliance [sic] that is destroying this country and thie [sic] futures of it's citizens and the futures of their children. We are excersizing [sic] our rights to stage peaceful protest and we are adamant in our attempt to find REAL solutions.

UPDATE: Gallery of the protestors