TV Junkie: Tuesday = #SOA on the Menu; Give us Feedback on 'Terra Nova' & More 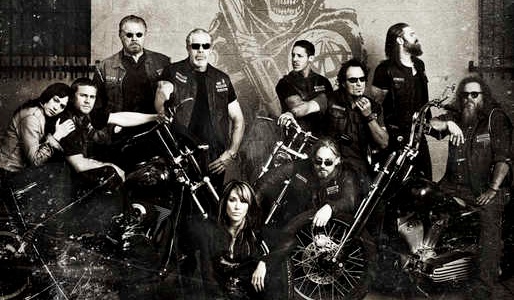 FX's "Sons of Anarchy" is an epic that has few true contenders on Tuesday nights and no substitute for the rest of the week.

Here we are with another Tuesday night dominated by "Sons of Anarchy" (FX @ 10pm). While it's true that those that abhor violence have "Parenthood" on NBC as a worthy option, as a guy with kids I watch TV to escape the drama and heartache that family life brings. I've heard some people describe #SOA as "Shakespeare on a Harley" which has never rung true for me. While there are plot twists enough that would make both King Lear and Macbeth sit up straight, it's the very real performances and contemporary motivations that make #SOA so interesting. Even William Shakespeare would have to admit the artifice of his medium interfered with the telling of his stories, something that is far less of an encumbrance for #SOA creator Kurt Sutter. So far this season, every episode of "Sons of Anarchy" has played like an individual film - we'll be tuning in through to the finale.
—-
How about giving us some feedback on Fox's "Terra Nova" premiere? The first episode allegedly cost about $20 million with subsequent episodes in the $4 million range (will we be able to tell the difference?). From what I saw on my Twitterstream most viewers were confused up until what was described as "a sappy ending." I'm always concerned about shows that heavily rely on visual effects as they can look dated by mid-season.
—-
The 20th Century Fox Television series that "Men of a Certain Age" co-creator Mike Royce is on board to pen is called "Little Brother," a multicamera comedy that revolves around a man who learns he has a half-brother who happens to be an ex-con [Update: We heard directly from showrunner Mike Royce who tells us "FYI, "Little Brother" is a SINGLE camera comedy and it's already written... starting to cast now." - Thanks for the corrections Mike, very much looking forward to the show!]
—-
Three Decades After It Stopped Being Funny: Andy Rooney Ending Regular '60 Minutes' Segment
—-
How about the "Weeds" and "The Big C" finales? I missed the first but caught the latter. The running thing in the series always kind of annoyed me as it's so obvious that Laura Linney is not a runner and should have consulted one and in this finale [Spoiler Alert] Cathy decides to do a marathon despite not training for one which is ridiculous. So many details were annoying about it: the marathon storefront had the lettering facing the insides of the space so that you could read its name, the idea that a marathon would have it's course open for 16 hours, and the suggestion that (obvious product placement) race sponsor Zico coconut water would be provided as electrolyte replacement made all but the major plot point difficult to follow. I won't spoil it any more than I have already but the series played a major card that they will have to work hard to wrap up in what might be the final season of the show next year.
—-
Fun Live Stuff This Week: Tomorrow night, Greg Proops brings his world-renowned live Proopcast, "The Smartest Man In The World," back to Bar Lubitsch at 7pm - free as usual at that location. On Friday, from the excellent podcast, "The Long Shot Podcast," Jamie Flam along with collaborator Vanessa Ragland, brings his Spanglers act to the Lab at the Hollywood Improv - starting at 10pm The Spanglers' Time Variety Hour Jamboree bring together talent from the worlds of comedy and TV.
—-
Rob Schneider is returning to primetime television with a new CBS sitcom based on his life as a confirmed bachelor who has just married into a tight-knit Mexican-American family. There is no officially-released name for it yet but it will appear as a mid-season replacement in early 2012. I interviewed Rob last year and am happy to see him getting back on TV, a medium he excelled at.
—-
The TV Junkie Must-Watch Plan: "History Detectives," "New Girl," "Raising Hope," "Sons of Anarchy," "Chelsea Lately," "Conan" (2nd half), "Late Night With Jimmy Fallon"

9:00pm New Girl Fox - Kryptonite Nick and Schmidt talk Jess into getting her stuff out of her ex's apartment; Jess meets her roommate Winston, a basketball player who has just returned from Latvia.

9:00pm Frontline PBS SoCal/KOCE - The Man Behind the Mosque A proposal to build a mosque at ground zero causes controversy.

9:00pm Raising Hope Fox - Sabrina Has Money Burt lets the family in on some information he learned about Sabrina; the Chance family meets Sabrina's father.

9:00pm 24 Hours in the ER BBC America - A student is dragged under a bus and folded in half; a 78-year-old falls off a ladder; head injury on a cyclist.

10:00pm Parenthood NBC - Step Right Up Sarah tries to remain a part of Amber's life, who is enjoying her independence; after Jasmine starts dating, Crosby wonders how she will fit into the Braverman family; Zeek shares relationship advice with Drew.

10:30pm Workaholics Comedy Central - Dry Guys The guys try to be sober for a week after a hard night of partying.